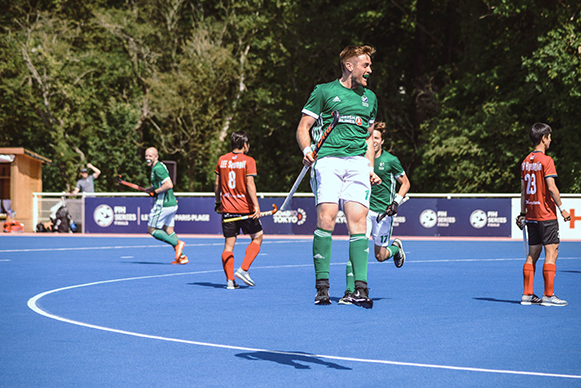 Continuing our series of video interviews with the teams that will participate in the upcoming FIH Hockey Olympic qualifiers, Ireland (FIH World Ranking:13) forward Shane O’Donoghue looks ahead to his team’s all-important two-match clash with Canada (WR:10), with a place at the Olympic Games Tokyo 2020 on the line. The crucial matches will take place at Rutledge Field, Vancouver, Canada on 26/27 October 2019, with the matches taking place at 15:00 (Pacific Daylight Time) and 14:00 (PDT) respectively. A transcription of the interview can be found below.

The FIH Hockey Olympic qualifiers will be taking place very soon. How is your team preparing for these hugely important matches?
Shane O’Donoghue: Preparation is going well. We have been together for the past six or seven weeks at camps here in Ireland, so things are going quite well. We have just come back from a trip to Bordeaux where we played two games against France. They were two competitive games and we came away with two wins. That was good for our morale after a disappointing summer. The spirit has lifted on and off the pitch so we are in a good place. We will finish [our preparations] off with a game against Belgium and then we go off to Vancouver, so preparations are going well. We have been working on a few different things, especially with a new coaching staff coming in. We have gone right back to basics and what was serving us well a few years ago and try to replicate it again.

What can we expect to see from your team at the FIH Hockey Olympic Qualifiers?
Shane O’Donoghue: This group has always been, and will continue to be, very ambitious. There is a lot of belief in the group and a nice dynamic. People will expect, particularly between ourselves and Canada, who are two evenly-matched teams, it is going to be a battle, there is no question about it. We are ready for it but no doubt Canada are as well. You will see a lot of belief in our game. It is a winner-take-all couple of games so we will go in all guns blazing, full of energy, full of belief and full of Irish fighting spirit, as we always have.

What would qualifying for the Olympic Games Tokyo 2020 mean to you and your team?
Shane O’Donoghue: It would be magnificent. It is the pinnacle of hockey for every international hockey player. I’ve experienced it once already as have a number of guys in the team. To experience it again would be extra special. With this current group there is a nice dynamic. It is a good blend of youth and experience and it is a very tight group. It would be very, very special for this group to go to the Olympics. And, for a small sport like us in Ireland, it would certainly keep us in the limelight. For the sport as a whole, if both the men and women were to qualify, it would be fantastic. It’s a dream on the line, two games to achieve that dream again and experience what a fantastic journey it is to go the Olympic Games.