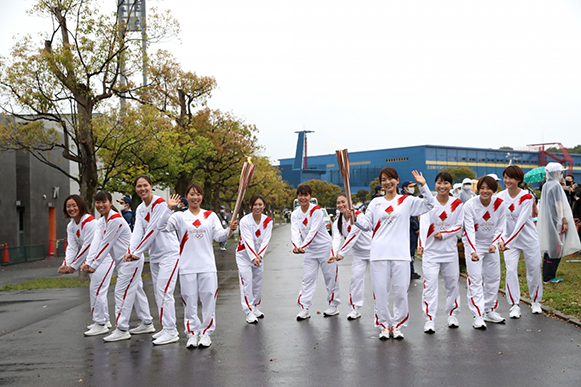 On 25 March 2021 at the J-Village National Training Centre in Fukushima, the Olympic flame began its 121-day journey across all 47 prefectures of Japan, with the Tokyo 2020 Olympic Torch Relay travelling the length and breadth of the country before finally arriving at Tokyo’s Olympic Stadium in time for the opening ceremony on 23rd July.

On Sunday (4 April), the iconic Olympic symbol arrived in the hockey hotspot of Gifu prefecture, an area that has hosted numerous top class international competitions from Olympic qualifiers to Asian Champions Trophies, all of which took place in the city of Kakamigahara.

The memorable day saw members of the Japan women’s hockey team became torchbearers, helping the Olympic flame through the Kakamigahara leg of its mammoth journey towards Tokyo. Sakura Japan legend Miyuki Nakagawa, who competed at the Athens 2004, Beijing 2008, London 2012 and Rio 21016 Olympic Games, carried the torch before handing it over to a group of current Sakura internationals, who ran alongside young hockey players before passing the Olympic flame onto Mr Asano, the Mayor of Kakamigahara city. A total of ten players from Sakura Japan took part, with 2018 Asian Games gold medallists and Tokyo Olympic hopefuls Natsuki Naito, Hazuki Nagai and Yuri Nagai amongst the group.

“It was such a tremendous experience”, said Hazuki Nagai, commenting on the torch relay. “I have realized that the Olympics will be held soon, and I must prepare for it, both mentally and physically. I really feel grateful and excited for hosting the Olympics in Japan. We will do our best for our success and hope we can share our excitement to everyone around the world with our performance.”

When asked to give a special message to all of the teams that will participate at Tokyo 2020, Nagai said: “The people in Japan are waiting for you all! We will do everything to prepare for the Games. See you soon in Tokyo!”

The hockey connections on the Tokyo 2020 Olympic Torch Relay will continue long after the flame has departed the Gifu prefecture. On the 16 May in Shimane, former Sakura Japan captain Yukari Yamamoto will carry the flame alongside a group of ten individuals specially selected by the Shimane Hockey Association, while Athens 2004 Olympian Rika Ishisa and men’s player Kazuki Yamamoto will be torch bearers in Toyama (2 June) and Yamaguchi (13 May) respectively. 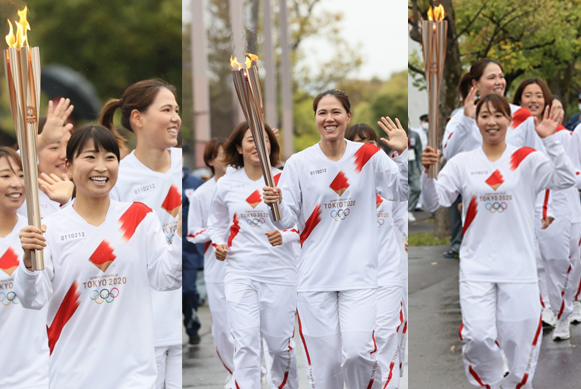 Throughout its journey, the flame will pass through 10,000 hands in a relay whose theme is, aptly given the times and pandemic and hardship all over the world, ‘Hope Lights our Way.’ It will move through 47 Prefectures and 859 municipalities, bringing the hope of new life and springtime in the glow of this most ancient flame – one peculiarly resistant to extinguishing.

Fukushima Prefecture was the perfect venue for the torch to begin its four-month journey to Tokyo. The area was devastated by the Great East Japan Earthquake of March 2011 and the effects of the ensuing tsunami and nuclear disaster are still felt there to this day. The city, though, has become a symbol of hardship and resilience. Of tragedy and triumph.

“I feel like it’s all finally underway,” enthused Seiko Hashimoto, President of the Tokyo 2020 Organising Committee. “It so happens these Games were postponed and as a result, overlapped with the 10-year anniversary of the earthquake. I couldn’t be more grateful if we got through the 121 days in one piece."

To find out all information about the Tokyo 2020 Olympic Torch Relay, please visit https://tokyo2020.org/en/torch/

To watch the live stream of the Tokyo 2020 Olympic Torch Relay, click here.