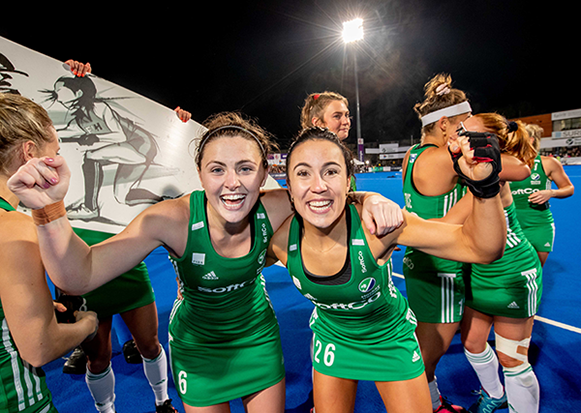 The build-up to the Olympic Games Tokyo 2020 starts right here! In the first of our Olympic Spotlights features that will examine all of the competing nations in Tokyo, we focus on a debutant team who have already proven themselves capable of achieving very big things.

Ireland women secured Olympic qualification for the first time in their history in dramatic style, edging Canada 4-3 in a shoot-out in front of 6000 enthralled fans at Dublin’s Energia Park, also known as the Donnybrook Stadium.

The Green Army – surprise silver medallists at the Vitality Hockey Women's World Cup London 2018, despite starting the event as the second lowest ranked of the 16 competing teams – trailed 3-1 in the shoot-out before staging a remarkable comeback, eventually winning in sudden-death.

Ireland – who will also be involved in the upcoming European Championships in the Netherlands – have been both authors and protagonists of an astounding story in recent years. Will they add another fascinating chapter in Tokyo? We speak to record goal-scorer Anna O’Flanagan to get her thoughts ahead of their history making Olympic campaign.

Anna O’Flanagan, thank you so much for talking to us! It may have been delayed by a year, but the Olympic Games Tokyo 2020 is fast approaching. Despite the delay and all of the challenges surrounding the covid situation, you and your Irish team-mates must be tremendously excited.
Anna O’Flanagan: “Yes, definitely. I think in the last couple of months we have really seen the possibility of the Olympics really going ahead. It is really clear what we have to do to get there and what it is going to look like when we are there. I think it has really spurred us on, and there is such excitement in the camp. We really cannot wait to get over there and get going.”

We all know that the Green Army has been making some serious history in recent years, famously winning silver at the FIH World Cup in 2018 in London before securing a first ever Olympic qualification, which we’ll come to shortly. It must give you plenty of confidence going into Tokyo. You must feel optimistic about what you can do over there.
Anna O’Flanagan: “This team is always quietly confident about what we can do and what we can achieve, and the World Cup was just a glimmer of that. We hope that the Olympics will be something similar, and we can just go there, show what we are made of and really compete with the top teams. It is the first time an Irish women’s team has ever been to an Olympics, so it is history in itself just being there. It is a product of so many years of work, and many different players, coaching staff and people within the organisation. For the group that does get to go, it will be a very special group, but it represents a much bigger picture for Irish hockey as a whole. We are just really excited to get there and do what we can for Irish hockey, to keep pushing it forward.”

To be the first Irish women’s hockey team to qualify for the Olympics is pretty special. Can you tell us what it was like on that special night at Donnybrook in 2019, when you defeat Canada in front of a packed stadium?
Anna O’Flanagan: “If I’m totally honest, I was just relieved. Many of us had been on this team for ten years, some girls 12 years or more. Some had been through three Olympic qualifying campaigns. There was the heartbreak of the Rio 2016 qualifying campaign, and then there was the build-up to the 2020 qualifier. I think, for me, the World Cup was such an exciting time. We were so happy being there and everything was going well for us. But going into that qualifier, there was a bit of pressure on us to qualify, especially after what we had achieved at the World Cup, not to mention the pressure we put on ourselves. The goal we had set for years was to be at an Olympic Games. With the way the games at Donnybrook panned out, we made it difficult for ourselves and we needed to, I think! When we eventually qualified on that night, I was just so relieved – it was like a weight was lifted off my shoulders. It is something that as a group we had been working on for what feels like hundreds of years, and it had eventually come off. It was obviously incredible, but relief was the main feeling!”

Both matches against Canada were incredibly tense affairs, with only the lottery of a shoot-out being able to separate your teams. It must have been an unbelievable feeling to emerge victorious, especially in front of such an enthusiastic crowd.
Anna O’Flanagan: “I think in the first game we probably left a bit out there – we could have gone into the second game in a much more comfortable position. We knew that the Canadians are a really good side. They are dogged, can dig deep and really produce results when they want to. The more we didn’t take our chances, the more we were letting them into the game. Towards the end of game two they had plenty of their own chances to take the win and qualify themselves. It was just extremely tense. The second game was difficult and edgy, but in the first half of the first game we left a few chances out there which probably put us on the back foot for the rest of that game, and the second game [too]. As we say, we got there in the end and nobody really remembers how you get there, just that you get there! We were grateful in the end that it came through.”

In Tokyo, the focus will be all about getting out of a tough looking pool and into the quarter-finals. Ireland are in Pool A alongside reigning World and European champions the Netherlands, current Olympic champions Great Britain as well as Germany, India and South Africa, who will be your first opponents on 24 July.  What are your thoughts about the pool?
Anna O’Flanagan: “As you said, every game in the Olympics is a massive game, and I think our pool is extremely difficult. It is a pool that we can set our sights on doing well in, and I think there are some key games in there that we really need to win. We’ve targeted some key games that we really need to win if we want to progress in the tournament. We’ve played South Africa over the past couple of years and had good results against them, and India we have some experience of at a major tournament, beating them. There are obviously some games that we have targeted quite heavily, and they won’t be easy, by any stretch of the imagination. Games in the past against India have been very tight. We just need to focus on those games and take each game as it comes. I think at an Olympics, especially after the year we’ve had with covid, the gap between the teams is so much less now. Teams haven’t been playing many games, everyone has been training with their teams, so the gaps aren’t really there that used to be there between certain nations. For us, it will be targeting each game as it comes, but having key games that we really need to win.”

What are your ambitions for Tokyo? Is it a case of the clichéd ‘taking it one game at a time and see where the journey takes us’, or do you have a clear target in mind?
Anna O’Flanagan: “For this team we want to get into the latter stages of the tournament and be in contention for a medal. I don’t think there are many athletes that go to the Olympics not wanting to win an Olympic medal. That is always the aim, it is something that we will target. It is an extremely difficult tournament, and results can mean that you are in a quarter-final or that you are in the last place play-off. The margins are so, so small. There isn’t much room for error at an Olympic Games. Getting through our pool and into a quarter-final is something that we expect of this group, and it is something that we will really push for. We know that when we get to those stages, anything is possible.”

On a personal note. After the Olympics are done and dusted, what is next for Anna O’Flanagan? After all, Paris 2024 is only three years away!
Anna O’Flanagan: “That is a pretty good question! To be honest, I feel physically good. I feel in a good place in terms of my hockey, and how that is going. I really love playing on this team, I love my team-mates and the fun we have together, and obviously the success we’ve had really adds to that. It would be a dream to play as long as I want to play, but you have to take other things into consideration. Unfortunately, you don’t make millions of Euros playing hockey for Ireland, and there are different things in your life that come into play that you cannot keep putting on hold. I think a few of those things will have to be weighed up, and a successful Europeans and a successful Olympics could sway me one way or the other. Currently I love every minute of it, and feel physically and mentally good. I don’t have any definitive plans in place. I just want to see how it goes, and really enjoy this. It is not every month or few months that you get to prepare for an Olympic Games, so I just want to enjoy it as best I can.”