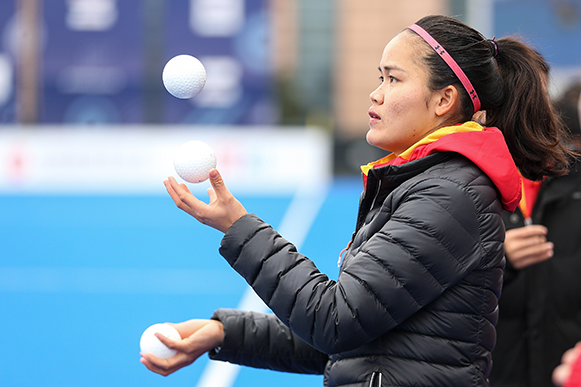 In the latest of a series of videos featuring athletes from the teams that will participate in the upcoming FIH Hockey Olympic qualifiers, China (FIH World Ranking: 10) women’s captain Cui Qiuxia looks ahead to her team’s crucial two-game home fixtures against the ever-improving Belgium (WR:12). The all-important matches will take place at Changzhou’s Wujin Hockey Stadium on 25/26 October 2019, with the winner securing a ticket to the Olympic Games Tokyo 2020.

The two sides twice faced each other in the FIH Pro League earlier this year, with Belgium’s Red Panthers winning 4-1 in Antwerp before claiming two points out of three in Changzhou, triumphing in the shoot-out after the match finished with the scores locked at 3-3. A transcript of the video can be found below.

The FIH Hockey Olympic qualifiers will be taking place very soon. How is your team preparing for these hugely important matches?
Cui Qiuxia: “We are all preparing as good as we can for the games against Belgium. We went abroad for play-off games against Spain and Ireland, and we got some good results.”

What are your thoughts about your opponent in the FIH Hockey Olympic qualifiers and how is your squad feeling about these matches?
Cui Qiuxia: “Belgium is a strong opponent. In the Pro League we played two games [against them], creating a lot of chances but we didn’t convert to win. So, in the [upcoming] month, we need to focus on making sure we score goals.”

What can we expect to see from your team at the FIH Hockey Olympic Qualifiers?
Cui Qiuxia: “I think everyone is looking forward to these two games. There will be more people there [at the stadium] to support us over the two games, which will be wonderful. Hopefully we can find a winner.”

What would qualifying for the Olympic Games Tokyo 2020 mean to you and your team?
Cui Qiuxia: “The Olympic Games is the most important competition. We want to go to Tokyo, we want to show the world China hockey, which will let more Chinese people know [about] hockey and [increase participation] in hockey sports.”