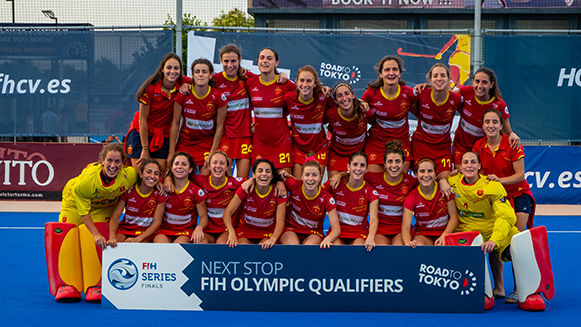 Continuing our series of video interviews with the teams that will participate in the upcoming FIH Hockey Olympic qualifiers, Spain (FIH World Ranking: 7) captain Georgina Oliva looks ahead to her team’s all-important two-match clash with Korea (WR:11), with a place at the Olympic Games Tokyo 2020 on the line. The crucial matches will take place at the Estadio Betero, Valencia, Spain on 25/26 October 2019, both matches starting at 20:00 local time. A transcription of the interview can be found below.

The FIH Hockey Olympic qualifiers will be taking place very soon. How is your team feeling ahead of these hugely important matches?
Georgina Oliva: “The feeling in the camp is really happy. We are really looking forward to starting the process for qualification for Tokyo. We have been training for this project for seven years so now is a good time to be in Tokyo.”

How have you and the squad been preparing for the FIH Hockey Olympic qualifiers in the past few weeks
Georgina Oliva: “After the European Championships we have been in Valencia in order to train for the qualifications. Now we know we are playing against Korea and we are going to be here 90 per cent of the time playing friendly matches against Argentina, Canada and China.

What do you expect of your opponents, Korea and how will you counter their strengths?
Georgina Oliva: We expect Korea to give us a really physical game. They run a lot and they close the spaces really fast and when they get the ball they can counter attack. It’s really aggressive but the Spanish team will first of all work to prevent the counter attack. After that, we have been working to improve our possession, so we recognise the spaces and we move the ball really well. I think we will have a loy of circle penetrations.

Finally, what would qualifying for the Olympic Games Tokyo 2020 mean to you and your team?
Georgina Oliva: For us [qualifying for] Tokyo will be the result of all the work we have done since Rio 2016. After that last Olympic Games we set the goal of being in Tokyo, so we have been fighting, we have been training and we have dome everything to be there. Also, it is the dream of every sports player to be there. It is the highest competition so to be there would be really exciting.