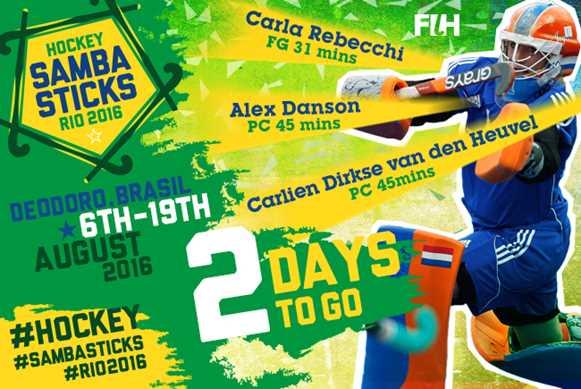 Two days to go! Today, we look back at three hugely significant goals from the women’s hockey competition at the London 2012 Olympic Games, in no particular order.

Semi-Final - Argentina 2, Great Britain 1
Key goal: Carla Rebecchi, FG 31mins
Argentina, the 2010 World champions, made a superb start to their Semi-Final meeting with home favourites Great Britain, subduing the expectant, largely partisan crowd with two goals in the first half. Noel Barrionuevo fired Las Leonas ahead with a low penalty corner drag-flick just five minutes into the contest, but it was a wonderful solo effort from Carla Rebecchi which proved eventually to be the winner. Entering the circle from the left, Rebecchi accelerated along the backline towards Great Britain goalkeeper Beth Storry before showing unbelievable skills to somehow eliminate her opponent on the inside and squeeze the ball into the goal with a desperate lunge. It was a moment of sheer brilliance, worthy of winning any match. Great Britain’s Alex Danson pulled a goal back with five minutes of the match remaining, but it was not enough to stop Argentina from reaching the Olympic final and guaranteeing at least a silver medal.

Great Britain recovered from their heartbreaking defeat at the hands of Argentina to secure their first Olympic hockey medal since 1992, when iconic striker Jane Sixsmith scored in extra-time to give her side a 4-3 win over Korea and guarantee bronze in Barcelona. At London 2012, Great Britain’s star striker was Alex Danson, who finished top of the scoring table alongside team-mate Crista Cullen with five goals each. In the battle for bronze against New Zealand - who had suffered a cruel shoot-out defeat at the hands of the Netherlands in their Semi-Final – Danson, Cullen and Sarah Thomas all scored penalty corners to give Great Britain an unassailable lead in the contest. However, it was Danson’s 45th minute opener that was arguably the most significant and certainly the best. In typically athletic style, Danson dived at full stretch to get a crucial touch on a perfect pass from team captain Kate Walsh (now Richardson-Walsh), guiding the ball into the goal and sending the majority of the 15,000 fans in the Riverbank Arena wild with delight. Although Danson was the scorer, it was a special moment for goal provider Kate Walsh, who battled through the pain of a broken jaw suffered earlier in the competition to guide her team to their first Olympic medal in 20 years.

The Netherlands and Argentina came into the London 2012 Olympics as the top ranked teams in the game, so this ‘dream final’ was always likely to be a close contest. Following a scoreless first half, it became clear to onlookers that whoever registered the opening goal would in all likelihood take the Olympic title. The Netherlands took the lead ten minutes after the break thanks to a penalty corner, although the scorer was not who you might think. Midfielder Carlien Dirkse van den Heuvel was the unlikely hero, producing a brilliant first-time volley off her back foot to fire the ball just inside the right post after the initial penalty corner effort was saved on the line by Las Leonas goalkeeper Florencia Mutio.  Less than ten minutes later, Maartje Paumen – the undisputed queen of the penalty corner drag-flick - put the result beyond all doubt with a ferocious penalty corner effort into the roof of the net, sealing a second successive Olympic gold medal for Oranje. Both Paumen and Dirkse van den Heuvel will be in action at Rio 2016 – will they inspire their team to a third Olympic gold medal in a row?