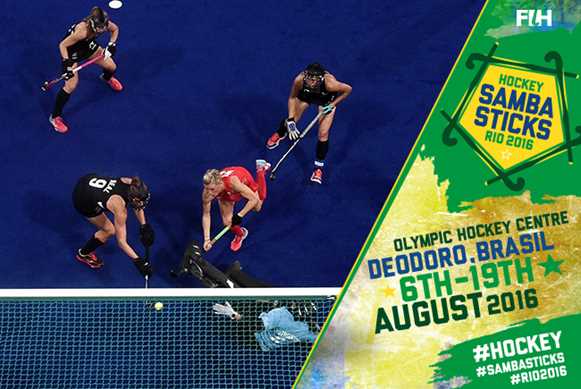 Defending champions the Netherlands will play Great Britain in the women’s hockey final at the Rio 2016 Olympic Games after both sides emerged victorious in their respective Semi-Finals on Wednesday.

The Dutch dream of a history-making third successive women’s Olympic hockey gold medal remains very much alive after defeating Germany in a drama-filled shoot-out after the match finished with the scores locked at 1-1.

Although the reigning Olympic and World champions will go into the final as favourites, they face a Great Britain team that is in the form of their lives. Team GB made it seven wins from seven matches at Rio 2016 to claim a 3-0 triumph over New Zealand’s Black Sticks and reach the Olympic final for the first time in their history.

The medal matches of the women’s Olympic hockey competition take place on Friday 19th August, with Germany and New Zealand doing battle for bronze at 12:00 Brasilia Time (GMT / UTC -3). The gold medal match between the Netherlands and Great Britain will get underway at 17:00.

Germany’s Die Danas (FIH Hero World Ranking: 9) took a shock lead against the Netherlands (WR: 1) in the first Semi-Final, with the 2004 Olympic champions moving ahead thanks to a first quarter penalty corner from Lisa Schütze. The title holders hit back in the second quarter through the ever-reliable Maartje Paumen, who netted a penalty corner in the 16th minute to level the scores at 1-1. Remarkably, that score-line remained unchanged for the rest of the match, meaning that the contest would be decided by a shoot-out.

A nervy shoot-out competition saw only four of the ten takers convert their chances, locking the score at 2-2 and initiating ‘sudden death’. Following successful efforts from Germany’s Janne Müller-Wieland and Willemijn Bos of the Netherlands, the match was settled when Marie Mävers was denied by Dutch shot-stopper Joyce Sombroek before Ellen Hoog scored to put Oranje on the verge of a historic third successive Olympic gold medal.

When asked whether she dreamed about playing for a third Olympic gold medal, Netherlands captain Maartje Paumen, a member of the winning squads from Beijing 2008 and London 2012, said: "Not dreaming, thinking. Training four years again for playing in the final again. We made it to the final now and the only thing we are here for is the gold medal. We have to play better than this game today."

Great Britain (WR: 7) sealed their first ever Olympic final place with a superb performance against a New Zealand (WR: 4) side that were dangerous throughout. The Black Sticks – who missed out on the bronze medal at London 2012 at the hands of Great Britain – had arguably the better of the first two periods, but it was Team GB who went into half time with a lead thanks to Alex Danson’s poacher’s finish following a saved penalty corner.

New Zealand pressed hard for an equalizer throughout the third quarter and into the early stages of the fourth, but found themselves unable to break through Great Britain’s rock-solid defensive line before the game’s key moment arrived in the 48th minute. Black Sticks captain Kayla Whitelock gave away a penalty stroke for a foul on Helen Richardson-Walsh and subsequently received a yellow card five minute suspension before the felled Richardson-Walsh picked herself up to double the advantage from the penalty spot. It was a knock-out blow for New Zealand, who quickly conceded another penalty stroke after great work from Lily Owsley, with Danson taking over penalty responsibilities from the injured Helen Richardson-Walsh to put Great Britain into the Olympic final.

“I’m just really proud of the girls”, said Team GB captain Kate Richardson-Walsh, speaking to the BBC after the match. “We’ve done it in every single game of this tournament. We’ve stuck to task, done our jobs and got the results that we’ve deserved and we’ve done the same again today. We have been so resilient. We had to ride out some serious storms from New Zealand, who are a fantastic team, and we defended like our lives depended on it.”

The Olympic hockey action continues on Thursday 18th August, with attention switching to the showpiece medal matches in the men’s competition. The Netherlands (WR: 2) and Germany (WR: 3), the finallists from the London 2012 Olympic Games, will fight it out for bronze at 12:00 Brasilia Time (GMT / UTC -3), before a hugely anticipated gold medal match between Belgium (WR: 6) and Argentina (WR: 7) gets underway at 17:00.