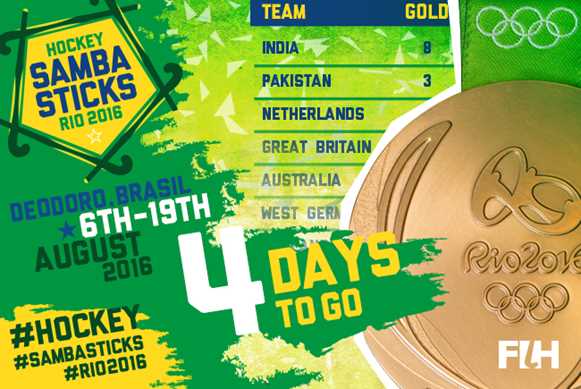 With just four days to go until the start of the Rio 2016 Olympic Games, we provide a quick look at some of the interesting statistics from the men’s Olympic hockey medals table.

Of the 12 men’s hockey teams competing at Rio 2016, nine have won at least one Olympic medal - Australia, Great Britain, Belgium, New Zealand, Spain, Netherlands, Germany, India and Ireland. Argentina, Canada and debutants Brazil are the only competing teams not to have claimed an Olympic medal, something that they will be aiming to change over the coming weeks. Remarkably, Ireland are making only their second Olympic appearance since winning the silver medal at the London 1908 Games.

India have won more Olympic gold medals than any other nation in the history of the men’s hockey competition, having collected eight Olympic titles. Their first arrived at the Amsterdam 1928 Olympic Games, and successfully defended their crown at the Berlin 1936, London 1948, Helsinki 1952 and Melbourne 1956 Games to make it five gold medals in a row.

During that time, India went unbeaten for 30 consecutive matches and scored 197 goals, conceding just eight. They added to their remarkable haul with gold medals at Tokyo 1964 and Moscow 1980. As well as eight Olympic golds, India has also claimed one silver (Rome 1960) and two bronze (Mexico 1968 & Munich 1972) medals and will be aiming to win a 12th Olympic medal in Rio.

Germany have claimed the last two gold medals thanks to their brilliant performances at the Beijing 2008 and London 2012 Olympic Games. If they claim gold in Rio, they will be the first team to win three successive Olympic titles since India’s trio of gold medals at the London 1948, Helsinki 1952 and Melbourne 1956 Olympiads.

Reigning world champions Australia have medalled at the last six Olympic Games, having taken silver at Barcelona 1992, bronze at Atlanta 1996 and Sydney 2000, gold at Athens 2004 followed by bronze medals at the Beijing 2008 and London 2012 Olympics. The team sitting at the top of the FIH Hero World Rankings will be aiming to claim a second gold in Rio, with squad members Mark Knowles and Jamie Dwyer both part of the victorious squad from Athens 2004. Famously, Dwyer was the scorer of the golden goal that defeated the Netherlands in final of 2004. Later that year, he was also crowned FIH Player of the Year, an award that he has now won a record five times.

In terms of individual achievements, five of the six all time top Olympic men’s hockey medallists are Indians, with Udham Singh and Leslie Claudius joint top the with staggering three gold and one silver from their four Olympic appearances. Randhir Singh Gentle, Balbir Singh and Ranganathan Francis are also triple gold medallists, with Teun de Nooijer of the Netherlands having claimed two gold and two silver medals from the five Olympics that he appeared at between 1996 and 2012. If Germany were to win Olympic gold in Rio, both Moritz Fürste and Tobias Hauke would join this elite group by becoming triple Olympic gold medallists following their successes with Germany at the Beijing 2008 and London 2012 Olympic Games.