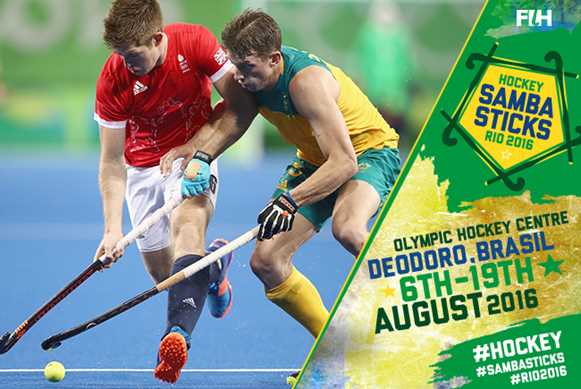 There were two crucial men’s Pool A matches on day five of the hockey competition at the Rio 2016 Olympic Games, with Oceania giants Australia and New Zealand getting important wins as the race for the Quarter-Final places continued.

Arguably the biggest game was the meeting between Great Britain (FIH Hero World Ranking: 4) and reigning World champions Australia (WR: 1), with the former starting the day third in the standings, one place above a Kookaburras team that had suffered defeats at the hands of Spain and Belgium in their previous two Pool A encounters.

The match was fiercely contested throughout, with little to choose between the sides until the fourth quarter when Australia’s Aran Zalewski benefitted from some superb attacking play from Daniel Beale to break the deadlock in the 50th minute. The Kookaburras added a second five minutes later, with Jake Whetton tapping in from close range after a devastating break forward. Ashley Jackson slammed home a penalty corner for Great Britain in the dying minutes, but it was the Australians who secured a massive victory in their bid to add a second Olympic gold medal to the one they claimed at the Athens 2004 Games.

While Australia’s title challenge is very much back on track, Great Britain must now get a positive result against Spain – who have won all three of their Pool A games to date – in their one remaining pool match if they are to have any chance of reaching the last eight.

Great Britain now find themselves sitting fifth in the Pool A standings, behind New Zealand (WR: 8), who powered to a 9-0 victory over Brazil (WR: 30) earlier in the evening, on goal difference. The Black Sticks scored in all four quarters to dominate the hosts, with Nick Wilson helping himself to a four goal haul. Simon Child, Shay Neal, Kane Russell, Stephen Jenness and Nic Woods also registered to massively boost New Zealand’s goal difference, something which could prove crucial when the pool phase comes to a close. New Zealand face current table-toppers Belgium in their final pool match, knowing that a place in the Quarter-Finals hinges on the outcome.

For Brazil, the result ended any hopes of a place in the last eight, and must now face a resurgent Kookaburras team in their final pool match.

Belgium and Spain, who occupy the top two positions in Pool A, go head-to-head on Thursday (11th August). Both Belgium and Spain have already secured a safe passage through to the Quarter-Final phase, with Germany and the Netherlands having done the same in Pool B.

Pool B
No matches played.