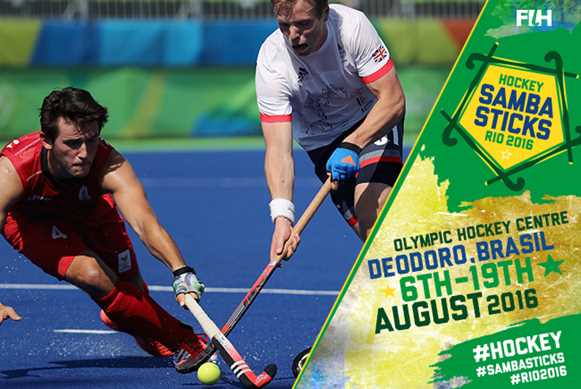 The men’s hockey competition at the Rio 2016 Olympic Games got underway on Saturday, with all 12 title challengers taking to the field in what was a thrilling, unpredictable and action-packed opening day at the Deodoro Hockey Centre.

In Pool A, Belgium (FIH Hero World Ranking: 6) proved themselves to be too good for higher-ranked Great Britain (WR: 4), with Jerome Truyens, Tanguy Cosyns, Simon Gougnard and Cedric Charlier giving the Red Lions a 4-1 win over the 1988 Olympic champions. Speaking after the match, Belgian captain John-John Dohmen said: "It's the perfect start. We played as a team, we played together, that was so important. It has been a long time since we've beaten them so for us it's the perfect feeling."

Reigning World, Champions Trophy and Hockey World League champions Australia (WR: 1) were given a stern test by Oceania rivals New Zealand (WR: 8) but eventually triumphed with a 2-1 victory. Chris Ciriello and Matt Gohdes gave the Kookaburras a 2-0 lead before Hugo Inglis pulled a goal back for the Black Sticks shortly after half-time. New Zealand gave an excellent showing of themselves but the top-ranked Australians did enough to claim all three points.

2008 Olympic silver medallists Spain (WR: 11) produced a strong performance to overwhelm host nation Brazil (WR: 30). Xavi Lleonart and Josep Romeu both scored twice as the Red Sticks claimed a 7-0 victory over the home favourites to finish top of the Pool A standings on goal difference at the end of day 1.

In Pool B, Argentina (WR: 7) produced a stunning fight-back to secure a 3-3 draw against the Netherlands (WR: 2) in what was the first hockey match of the Rio 2016 Olympic Games. Goals from Jeroen Hertzberger, Mink van der Weerden and Seve van Ass gave Oranje a 3-1 lead going into the final quarter, but strikes from Lucas Vila – who also netted in the first half – and Matias Paredes ensured that the sides coached by former Argentina team-mates Carlos Retegui (Argentina) and Max Caldas (Netherlands) each claimed a point from their opening fixture.

Ireland’s Green Machine (WR: 12) came close to stealing what would have been a remarkable point in their first Olympic hockey match for over 100 years, going down to a narrow 3-2 defeat against eight times Olympic champions India (WR: 5). Rupinder Pal Singh scored twice in the contest for the Asian champions, with his 48th minute strike proving to be enough to give India a winning start to their Olympic title challenge.

2008 and 2012 Olympic champions Germany (WR: 3) got their competition off to a flying start with a 6-2 win over Canada’s Red Caribous (WR: 15), sending out a warning to all teams that they are more than ready to defend their Olympic title. Double Olympic gold medallist Moritz Fürste and Niklas Wellen both netted doubles for Die Honamas, who top Pool B on goal difference at the end of the opening day of competition.