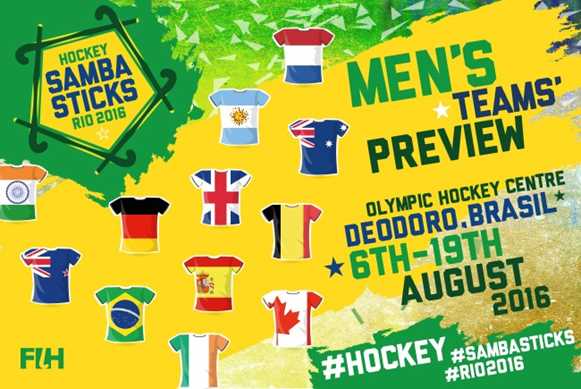 Men's Olympic Preview: Who will strike hockey gold in Rio?

The Greatest Show on earth is almost upon us, and the planet’s finest hockey teams are preparing to battle it out for the biggest prize in sport – an Olympic gold medal.

In this, the first of two previews, we focus on the men’s competition where Germany are aiming to claim a third successive Olympic title, a feat not achieved since India’s trio of gold medals at the London 1948, Helsinki 1952 and Melbourne 1956 Olympiads.

With six teams fighting it out for four quarter-final positions in each pool, every single match has meaning and one slip-up could prove costly. Here's a look at the competing teams.

Australia - FIH Hero World Ranking: 1
The Australia team selected by Head Coach Graham Reid for Rio features 10 returning Olympians and six eager debutants ready to fight together in a bid to reclaim the gold medal that they won at the Athens 2004 Games.

Led by star defender Mark Knowles – who alongside Jamie Dwyer was a member of the Kookaburras team that won gold in Athens – Australia are very much the team to beat. The 2014 World Cup winners recently claimed their 14th Hockey Champions Trophy in London, Great Britain, and were the 2015 Hockey World League Champions. Can anyone stop them?

Looking at their recent history, you certainly would not bet against them. There has been a steady improvement since their disappointing ninth place finish at the Athens 2004 Games, with the team taking fifth at Beijing 2008 before losing the bronze medal match at London 2012 against Australia.

Belgium - FIH Hero World Ranking: 6
Belgium have made huge strides forward over the past ten years and are now rated as one of the most feared attacking sides on the planet.

The Red Lions squad for Rio contains a staggering amount of international experience, with the vast majority of the squad having surpassed the 100 international appearances mark including treble centurions John-John Dohmen and Jerome Truyens as well as double centurions Cedric Charlier, Thomas Briels, Felix Denayer and ace striker Tom Boon.

Interestingly, Ryan Archibald’s father, Jeff, was a member of the Black Sticks squad that won the gold medal at the 1976 Olympic Games in Montreal, Canada.

Under the stewardship of Head Coach and former France international Frederic Soyez, a talented new generation of Red Sticks players are working hard in a bid to return Spain to an era of greatness that culminated in an Olympic Silver medal at the Beijing 2008 Olympic Games.

Brazil - FIH Hero World Ranking: 30
The host nation may be the lowest ranked team in the men’s competition, but they are very much here on merit.

Set the target of achieving a top six finish at last year’s Pan American Games in Toronto by both the International Olympic Committee (IOC) and the International Hockey Federation (FIH), Brazil went one stage better, reaching the semi-finals to guarantee a top four finish at the event.

Brazil are sure to be inspired by the passionate support of their home fans, who will be cheering them in samba style along every step of the way.

In-form and with plenty of firepower, the silver medallists from London 2012 are genuine contenders for the gold medal.

Germany - FIH Hero World Ranking: 3
The Olympic champions of 2008 and 2012 are always capable of winning every tournament they enter, and have set themselves the target of making it three in a row at Rio 2016.

Midfield star Tobias Hauke (2013) and former midfielder turned defender Moritz Fürste (2012) – both double Olympic gold medallists - are rightfully considered amongst the best players in the history of German hockey and will be central to Die Honamas’ title challenge.

Argentina - FIH Hero World Ranking: 7
Over the past two years, 2015 Pan American Games winners Argentina have developed into a side that can challenge the very best in the world.

Head Coach and former Argentina international Carlos “Chapa” Retegui – the man who, remarkably, guided both the men and the women’s national sides to bronze medals at the Rabobank Hockey World Cup – is overseeing  the revolution, helping Los Leones (The Lions) to realise their massive potential.

Their squad is packed full of immense talent. Team captain P.R. Sreejesh is one of the most gifted and charismatic goalkeepers around, while drag-flicking defenders V.R. Raghunath and Rupinder Pal Singh are a constant threat at penalty corners.

India are back amongst the big boys and could easily grab a medal in Rio.

Ireland - FIH Hero World Ranking: 12
By qualifying for Rio 2016, the Green Machine sealed their place in sporting history as they became the first Irish team, in any sport, to qualify for the Olympics since the 1908 Games in London.

The team coached by former South African international Craig Fulton, the FIH Hockey Stars Coach of the Year 2015, have set their sights on reaching the quarter-finals, and judging by their remarkable bronze medal at last summer’s Unibet EuroHockey Championships, they are certainly capable of achieving that.

Key players include FIH Hockey Stars Goalkeeper of the Year 2015 Davey Harte and midfielder Shane O’Donoghue, who averages a goal every two games for his country.

Canada - FIH Hero World Ranking: 15
Canada’s Red Caribous have long been a major force in Pan American hockey, having claimed a glittering collection of medals from the Pan Am Games and Pan Am Cup competitions.

Their rivalry with Pool B opponents Argentina is the stuff of legend, with the two nations contesting every major Pan Am final since 1975.

Scott Tupper, Mark Pearson and Matthew Guest are star performers outfield while goalkeeper David Carter is rapidly gaining a reputation as one of the finest shot-stoppers on the planet.


The Olympic hockey events take place from 6-19 August at Rio’s purpose-built Deodoro Olympic Park, and will feature the 12 men’s and 12 women’s international teams that qualified through the Hockey World League and Continental Championships.

Make sure that you use #Hockey, #SambaSticks and  #Rio2016 on social media when showing your support for your nation, and follow FIH for all the latest updates as teams and fans get ready for the biggest show on earth – the Olympic Games.

Tickets for the Olympic Games can be bought here.