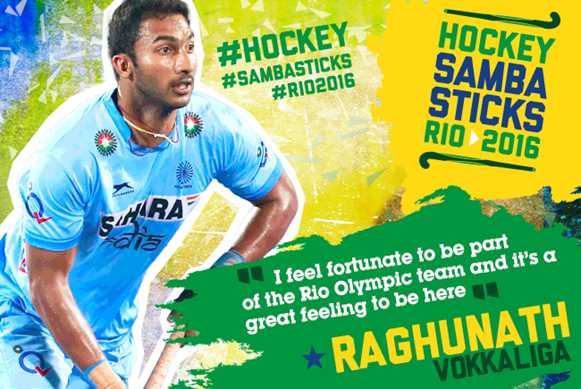 Raghunath Vokkaliga has played for India on more than 200 occasions while Preeti Dubey is one of the newest recruits to the India women's hockey team, with just nine caps to her name. Where Raghunath has been a member of the senior men's squad since 2005 and has seen Olympic action before (London 2012), this will be Preeti's first major competition. The International Hockey Federation (FIH) caught up with both athletes to discover how they were preparing for their opening games – against Ireland and Japan respectively.

For Raghunath, the past few years have seen a sea-change in the India team's preparations. He credits both the President of Hockey India, Dr Narinder Batra and Head Coach Roelant Oltmans with creating a much higher level of professionalism among the players. He said: "This was not the case when I began playing," says the defender. "The players are respected and looked after very well. Hockey India has created a lot of opportunities for players by bringing in good tournaments and leagues.

"The exposure for players now is tremendous. I think hockey in India is moving in the right direction and you can see the improvements with the results we have achieved in the past three-four years. Coach Oltmans has been with us for that time and has changed the team for the good. He has brought in good work ethic where the onus of win and defeat is taken up by the entire team and not just the Captain, Vice-Captain or senior players. The preparations ahead of every big tournament is different, he makes sure we are totally prepared both on and off the field, mentally and physically. He has taught us how to handle pressure ahead of big matches and you will get to see some good action from us this Olympics."

Where Raghunath has been part of the international set-up for 11 years and has travelled the world for his sport, Preeti on the other hand has only been a member of the senior squad for six months, so for the young forward, every day is a new experience. She said: "My life has changed so much in the past two years. It’s been only two years since I came into the junior camp. It’s a new lease of life for me. I’m getting to travel to different countries for tournaments, travel on a plane, eat different cuisines. The experience and exposure I’m getting by playing different international matches has given me the confidence to move forward. The past two years have been the best years of my life and I really worked hard to earn a place in the senior team."

For many years until the 1990s, the India men's team was the leading light in men's hockey world and the players were household names. Raghunath recalls his own early memories of hockey. "My earliest memory of watching the Olympics was in the early 90s – the Barcelona Olympics and the Atlanta Olympics. I was awe-inspired. My Olympic hero is Dhanraj Pillay who has played in four Olympics. He was magical on the field and I really look up to him."

With qualification for Rio, it seems hockey in India is not just returning to its former glories, but with the women's team gathering a growing number of followers, it is on its way to becoming a sport of parity. Preeti says, "Playing hockey itself has brought in many changes. I feel people take note of us and our performance now like never before. They recognise us and ask for a picture with us."

"I feel fortunate to be part of the Rio Olympic team and it’s a great feeling to be here in the Athlete's Village and soaking up the atmosphere. I am getting to meet some of the finest athletes in the world and the respect with which each and every athlete is treated is overwhelming. I am very happy that my hard work has paid off. I'm trying to learn as much from the team to ensure I improve my game."

While the few days before competition offers a chance for athletes to settle in and acclimatise, the business end comes along soon enough. For Raghunath, the memories of London 2012 still burn strong. "The London Olympics was a big disappointment as we could not pull off a win. But after 2012 Olympics we re-grouped as a team, we had a few changes in the team. We have accepted the defeat and have come back stronger. Now the team takes up the ownership whether it’s a win or a loss. There is no ego or attitude issues in the team which is most important. Boys have accepted their mistakes and have tried to learn a lot in the past four years. I feel that’s the biggest change and the kind of effort each of us are putting is for the benefit of the team."

For Preeti, there is no memory of Olympic disappointment lingering in the back of her mind. Instead her approach is one of sheer delight at being part of the first India women's squad to feature at the Olympics since 1980. "I never imagined that I would get to play at the Olympics so early in my career. In 2012, when I saw the Olympic Games coverage on TV, I hoped to represent India someday. It was a dream and I kept 2020 as a realistic target. I feel extremely fortunate. I garnered a lot of support from my coaches, Hockey India and officials at SAI (Sports Authority of India) and that is the reason I’m here today at the 2016 Olympics."