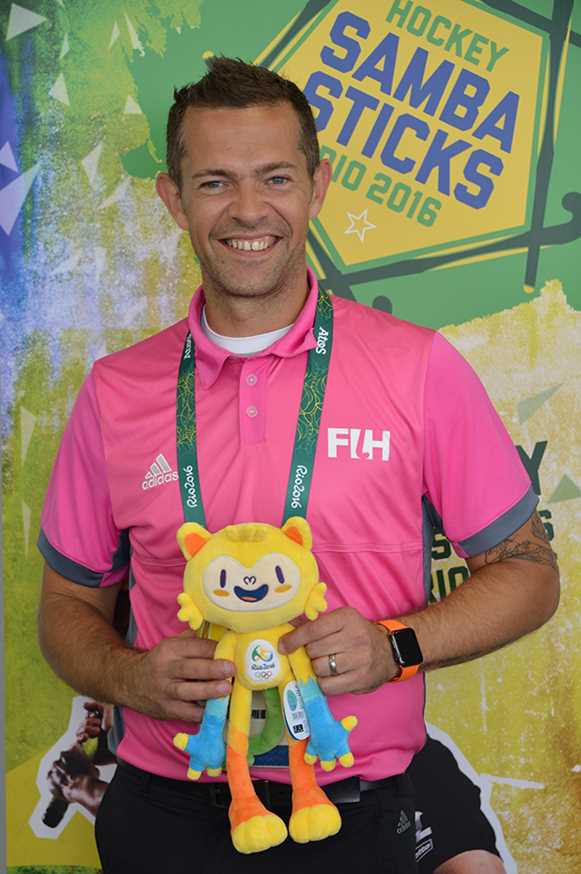 The excitement of Olympic hockey is in full flow as teams vie for the precious first to fourth places in the pools and the prize of Olympic Quarter-Final places. For the players from the Netherlands, a tense 2-1 victory over India meant they left the field on day six of the competition in euphoric fashion. India trooped off, disappointed in failing to capitalise on the pressure they placed the pool leaders under.

One man whose demeanour never changes whatever the result is Martin Madden, the self-contained Scotsman who, during this game, has just become the 39th man to receive a FIH Golden Whistle for umpiring 100 senior international matches.

Madden is calmness personified, whatever is happening on the pitch, and it is his quiet, thoughtful personality that has made him into one of the top umpires in the world.

It is clearly also in his genes – father Craig was the first Scot to receive the FIH Golden Whistle, back in 1996. Madden himself is just the third Scot to achieve the milestone: fellow umpire Ged Curran joins the two Maddens on the roll call of honour.

Martin became an international umpire in 2000, and reached grade 1 two years later, but he didn’t really hit the big time until he umpired the Hockey Champions Trophy in 2012.

He became a World Panel umpire in 2014, umpiring at the 2014 World Cup in the Hague. Now he is one of the 17 men in the umpiring team for the men’s Olympic event.

Speaking after receiving his Golden Whistle, Martin said that receiving the award was something he “had dreamed about from his first international.” And there was a hint of the competitiveness that has driven him to the top of the game when he added: ‘My dad got his Golden Whistle, so its great to catch up with him as well.”

His appointment to the Rio Olympics is the highlight of Martin’s career so far but he says he is always eager for the next challenge. As soon as this Games is over, the Scotsman will be looking to the next major event to set his sights on.

His love and enthusiasm for the game shines through as he says: “ I’ve walked around and seen a few other sports here in Rio, but there is no other sport like hockey. It is fast and intense and everyone I have spoken to agrees. It is the best sport there is.

“The action on the pitch is intense and here, where you have got the best teams in the world competing, there just isn’t ever a bad game.”

While the pressure on the pitch is intense for the men and women who blow the whistle, there is still some time to enjoy all that Brazil’s major city has to offer.

“I haven’t been to Brazil before, so it is nice to see somewhere new,” and with that magnificent understatement, Martin disappears to debrief and prepare for his next game.