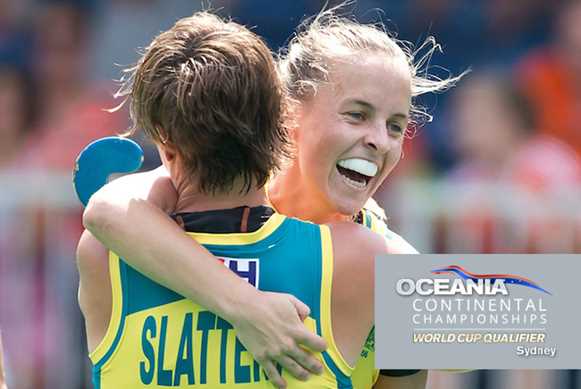 With only a few days to go until the Oceania Cup 2017 gets underway, Australia's 18-strong squad are making their final preparations ahead of the crucial Hockey World Cup London 2018 qualifier which will be played at Sydney Olympic Park Hockey Centre from 11-15 October.

The Hockeyroos take on New Zealand's Black Sticks, both knowing that they have already qualified for next year's showpiece Hockey World Cup in London thanks to their final standings in the FINTRO Hockey World League Semi-Final in Brussels, Belgium. Papua New Guinea however will be looking to cause a major upset by defeating both to win the title and qualify for the World Cup as Oceania continental champions.

Should Australia or New Zealand win the Championship, this will open up another qualification opportunity for the highest placed team from the Hockey World League Semi-Finals who have not already qualified, which would be Ireland.

Australia have won six of the nine editions of this biennial event, New Zealand winning the other three. With the backing of a the home crowd Australia's Hockeyroos will be looking to make progress following their disappointing fifth place finish at the Hockey World League Semi-Final in Brussels.

Hockeyroos Coach Paul Gaudoin said: “Selection was challenging. We’re learning about the group and we’re still not decided on the make-up of our squad for next year, but we think we’ve picked a team that can win the Oceania Cup. We’ve had some injuries as well that has taken people out of selection such as Georgina Morgan, Gabrielle Nance and Mariah Williams, but the selected group is solid.”

Gaudoin also confirmed 25-year-old forward Emily Smith has been appointed as permanent captain and will lead the team for the first time in Sydney. Smith takes up the captaincy following long-term skipper Madonna Blyth’s retirement last year, with Jane Claxton holding the role on an interim basis.

“Emily has shown a consistent approach to her hockey, she’s well respected by her peers and the Hockeyroos staff, so it was a pretty simple decision in the end,” Gaudoin said. “We haven’t rushed into selecting our captain or leadership group over the past year. We’ve had interim leadership groups for tournaments, but we’ve utilised the year to explore the playing group and see what we really needed. I don’t want her to do too much different. She’s been involved with leadership groups previously.”

Smith, who hails from Crookwell in country NSW, will be supported by Claxton, Rachael Lynch, Kathryn Slattery and Karri McMahon in the leadership group.

“We want to see a step-up among the whole group with Emily helping and enabling that,” Gaudoin said. “She’s got some good supporters underneath her. We’ve selected those people in order to drive our group forward. We need to get people on board to come with us to the next level.”

Australia’s Oceania Cup opponents New Zealand and Papua New Guinea are ranked sixth and 50th respectively in the FIH Hero World Rankings. The Hockeyroos are currently fifth but were knocked out of the 2016 Olympic Games in Rio de Janeiro at the Quarter-Finals stage by New Zealand's Black Sticks. New Zealand also defeated Australia at the 2012 Olympic Games in London, fuelling the rivalry.

Gaudoin said there was a lot to gain for Australia at the Oceania Cup.

“We want to win the tournament,” Gaudoin said. “Ranking points are important. We want to keep working on the development of our group and our playing style. We want to make sure we can perform well against these two countries, including one who is a very competitive team ranked in the top six in the world.”

The squad will fly to Sydney for the tournament on Monday 9 October following the conclusion of the Australian Hockey League in Perth.