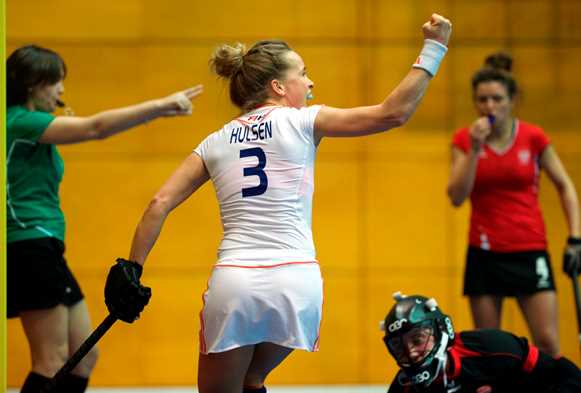 Ukraine have become the eighth and final team to reach the quarter-final stage of the Indoor Hockey World Cup as the women’s Pool phase came to an end on Friday morning. The Ukrainians join Germany, Australia and Austria as qualifiers from Pool A, with Netherlands, Belarus, Czech Republic and Poland reaching the last eight from Pool B.

Host nation Germany emerged as 5-1 winners in the big Pool A clash against Australia, a result which secured their place at the top of the Pool ahead of the team from Oceania. “We are playing on a constant level now, and we have progressed from game to game”, said Germany’s Anne Schröder, who scored twice in the game. Regarding Germany’s quarter-final, Schröder said: “We played Poland in a test match and it was tight. We have a feeling that the other Pool was stronger than ours, so we know that every match coming will be very tough.”

Ukraine’s safe passage was confirmed with a 2-2 draw against Austria, although team member Halyna Liashenko was far from happy. “I’m disappointed because we wanted to win today. Now we finish fourth in the table, which means that we will have to play the Netherlands in the quarter-final. We really wanted to avoid that so it is getting really tough now.”

Belgium finished bottom of the pool but claimed their first point of the tournament with a 2-2 draw against Canada. “Although it was our first point of the tournament, it is still very disappointing. We’ve had a few close games and this match was another close one. We were just unlucky in the way we conceded goals," said Belgium's Laurine Delforge.

The quarter-finalists from Pool B were already confirmed on Thursday, so it was a case of figuring out exactly where each team would finish and which side they would subsequently have to face in the knockout phase. The Netherlands maintained their devastating form to finish top of the Pool with a 6-3 win against Poland, who finished fourth in Pool B.

“In general, we are happy with the pool matches, although we have lost a bit of structure in the last two games”, said Netherlands Claire Verhage, who netted a double in the match. “We now need to play more with our brains instead of our hearts. The Ukrainian team is different from in the past and I don’t think they are at their strongest here, but it is a knock-out match and anything can happen."

Belarus finished second in the Pool after turning on the style to hammer third place finishers Czech Republic 7-0, leapfrogging their opponents in the process. Krestsina Papkova scored a hat-trick in the match, with Sviatlana Bahushevich also netting twice.

As in Pool A, the bottom sides in Pool B claimed their first tournament points as South Africa and Kazakhstan played out a 5-5 draw. “I’m not satisfied with our performance in the Pool matches”, said Kazakhstan Head Coach Serik Kalimbayev after the game. “We should have at least got a victory today and it was our goal to finish in the top six, which isn’t reachable anymore. It is a pity that we finished last in the Pool, as we would have got an easier opponent if we had finished fifth.”

You Tube - Live from Friday
The FIH You Tube channel will become active from the quarter-finals, with highlights of key matches being posted as soon as they become available. To visit our You Tube channel, click the link below: www.youtube.com/fihockey