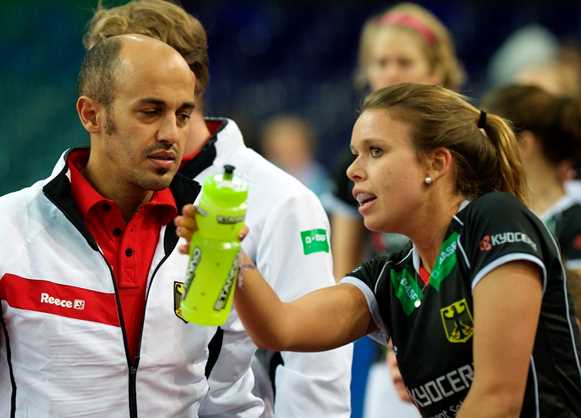 Germany, Australia, Netherlands and Belarus all secured their places in the quarter-finals of the women’s Indoor World Cup by claiming victories in the first session of competition Day 2 in Leipzig, Germany.

Germany sealed their place in the last eight with a 6-3 victory over Ukraine, with Katharina Windfeder scoring twice for the host nation. “We are satisfied with three wins and we have the potential to make it to the top, but there is definitely room for improvement”, said Germany captain Katharina Otte.

Die Danas are joined in the quarter-finals by surprise team Australia, who continued their excellent form with a 3-1 win over Canada to draw level on points with Germany at the top of Pool A.  “We played more defensively today as we knew the Canadians do a lot of running”, said Australia Head Coach Stewart Fenton. “We knew that if we won this game we would be through to the quarters, now we need fight for our place.”

Austria remain on track for a quarter-final place having overcome a stern challenge from Belgium to move onto six points, with team captain Kristine Vukovich scoring twice to guide her team to victory.

After two clean sheets on Day 1, the Netherlands conceded their first goals of the tournament in their Pool B meeting with Czech Republic, but it did not stop the dazzling Dutch girls from emerging as 7-2 winners to book a ticket to the quarter-finals. “It was a good game, and we are pleased that we converted our chances”, said Netherlands’ star Lieke Hulsen, who netted twice in the match. Czech Head Coach Chris Faust was disappointed with the result, saying:  “We made simple mistakes today, and we now need to refocus on this evening’s match against Kazakhstan. We were really afraid of the Netherlands, although my team had no reason to be afraid.”

Belarus confirmed their place in the quarter-finals thanks in part to a fine individual performance from Krestina Papkova, who bagged five goals in an 11-0 victory over South Africa. “We had some difficulties in our draw with Poland yesterday, but we had a look at our mistakes and every player knew exactly what her tasks were on the pitch”, said Belarus Head Coach Ihar Mirzahayanau. “We are taking it one step at a time, but we looking forward to the quarter-final.”
Poland’s chances of reaching the quarter-finals improved with a 6-1 win over Kazakhstan, a result described by team captain Marlena Rybacha as “an important win, especially because we were really disappointed with yesterday's results.”