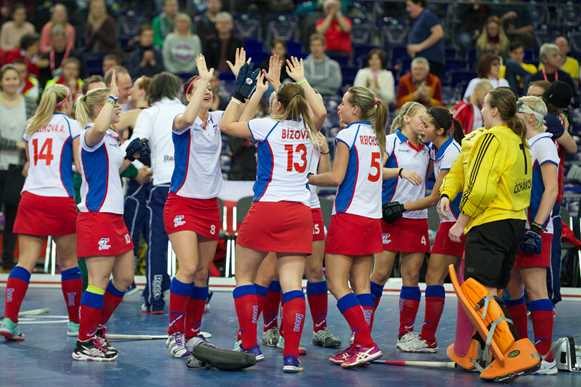 Czechs, Austrians, Germans & Dutch power into women’s semis
Day 3’s evening session at the Indoor Hockey World Cup featured the women’s quarter-finals, with Czech Republic, Austria, Germany and the Netherlands all sealing their places in the final four with victories in Leipzig.

Czech Republic continued their hugely impressive form at the Indoor World Cup by storming into the semi-finals with a 4-3 triumph over Australia. Double strikes from Adela Reinosova and Adela Meijzlikova gave the Europeans the victory to set up a semi-final meeting with the Netherlands. “We are very happy and we feel really well prepared for this”, said Czech captain Tereza Mejzlikova.  “Before the start of this match we were singing ‘YMCA’ in the changing room, which is our team song, and we were very confident that we could do it. Now we play off for the medals.”  Australian captain and birthday girl Emma McLeish was gracious in defeat, saying: “We are so disappointed, but the Czech Republic played us out very well and deserved the victory. Now our new goal has to be finishing fifth.”

In the second quarter-final, Austria came needed the drama of a shoot-out to defeat Belarus, meaning that the Belarusians miss out on the top six for the first time in Indoor World Cup history. The Austrians surged into a 3-0 lead but were pegged back by Belarus before Julia Busch netted the crucial goal in the shoot-out to set up a semi-final clash against host nation Germany. “We had the luck on our side tonight”, said Julia Busch after the game. “Letting them come back into the game was not what we intended but it does happen in indoor hockey.”

Pool A winners Germany were given a massive scare by Poland in the third quarter-final, with the team that finished fourth in Pool B holding the lead through Paulina Okaj before second half strikes from Katharina Otte and Kristina Hillmann put the home favourites into the semis. “We were not surprised by how strong Poland were, only surprised that they finished fourth in their Pool”, said Germany’s Hillmann. “We didn’t show our best form in the first half but we improved after some strong words from our coach at half time.” Poland keeper Dominika Nowicka struggled to hide her disappointment after the game. “I’m so sad because it was very close. At the moment I cannot say what went wrong; the staff needs to tell us. Our aim was to finish in the top four but now we have to play for what is left.”

The Netherlands overcame stern resistance from a talented and stubborn Ukraine to emerge 2-0 winners to seal their semi-final berth. The match remained goal-less until two minutes from time when team captain Karin den Ouden fired home a penalty corner before Vera Vorstenbosch wrapped the game up in the final second. “We didn’t expect that we would score our first goal in the last five miunutes”, said Netherlands Head Coach Marieke Dijkstra. “We were aware that it would be close, but not that close. The Ukrainian goalkeeper and the defenders did a great job.” Regarding her team’s semi-final meeting against Czech Republic, Dijkstra added: “On paper we are better, but that doesn’t mean anything so it will be a very exciting game.”

There were also two matches from the 9-12 classification phase, with Canada defeating Kazakhstan 4-1 and a delighted South Africa beating Belgium in a shoot-out after the game finished with the scores locked at 2-2. Canada and South Africa will now play in the 9-10 classification match, while Kazakhstan and Belgium facing off for 11-12.

You Tube - Live from Friday
The FIH You Tube channel will become active from the quarter-finals, with highlights of key matches being posted as soon as they become available. To visit our You Tube channel, click the link below: www.youtube.com/fihockey