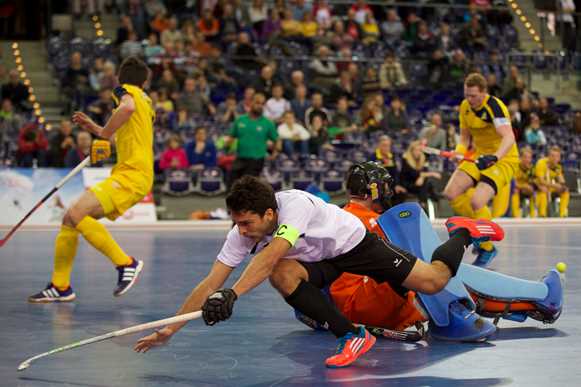 Germany, Austria, Russia and the Netherlands all booked their tickets to the quarter-finals in the first men’s session of Day 2 here at the Indoor Hockey World Cup in Leipzig.

Reigning Indoor World champions Germany claimed their third win of the tournament by defeating Czech Republic 9-4, with Alexander Otte grabbing a hat-trick. “It is hard to compare yesterday’s matches to todays because the Czech Republic were playing quite defensively”, said Germany Head Coach Stefan Kermas. “However, we have made a step forward and showed our quality by scoring nine goals against them as they only conceded one goal on Wednesday. This evening’s match against Austria will be exciting. The boys are looking forward to it, but we know this will be the first benchmark.”

Like Germany, Austria ended the session with nine points as a Patrick Schmidt double strike helped his team to a 4-1 win against Sweden. Austria’s Xaver Hasun said: “We are very happy so far. It is our aim to avoid playing the German team in the cross-over matches for as long as possible, but wouldn’t mind beating them in the final!”

Iran currently sit third in Pool A after recording an 8-5 victory over Australia in a fiery clash, with the Aussies being forced to play the entire second half a man down due to the sending off of Paul McKinnon. Iran’s Navid Taherirad, who hit a hat-trick in the game, said: “We had two tough games at the beginning, but today we were able to show what we had learned from it. We are very happy with the win, and definitely want to reach the quarter-finals. We need to collect as many ranking points as possible because we hope that Asia can bring two teams to this event in the future.”

In Pool B, Russia confirmed that they would be making an appearance in the last eight by crushing South Africa 10-2, with Alexander Likov (5) and Marat Khairullin (4) netting nine goals between them.

Russia have are the only team in Pool B to have won all three of their matches, with the Netherlands losing their 100% record in a 3-3 draw with triple Indoor World Cup silver medallists Poland. The Dutch were 3-0 up in the match, but Poland’s brave decision to replace their keeper with an outfield player inspired a brilliant comeback with Tomasz Gorny scoring twice.

“Today we showed everyone our true character”, said Poland’s Bartosz Zywczka “Reaching the final on the past three occasions doesn’t put us under pressure, we will just play the best we can.”Switzerland claimed a 4-0 win over Canada to move onto four points and keep their quarter-final hopes very much alive. Like South Africa, Canada are yet to claim a point in Pool B, but shot-stopper Shankar Premakanthan remains optimistic.

“It was a tough game and we struggled to break through the Swiss defence to create our chances. We still believe we can reach the quarters, but we need to beat South Africa and we will see what happens after that.”


You Tube - Live from Friday
The FIH You Tube channel will become active from the quarter-finals, with highlights of key matches being posted as soon as they become available. To visit our You Tube channel, click the link below: