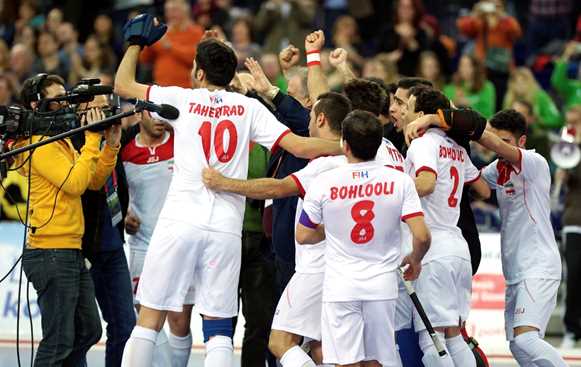 Iran and Austria created the big headlines in the first session of Day 4 at Indoor Hockey World Cup by dumping powerhouses Russia and Poland out of the men’s competition in the quarter-final phase.

Iran, ranked 10th in the FIH Indoor World Rankings and who finished fourth in Pool A, caused one of the biggest shocks in Indoor World Cup history by hammering Pool B winners Russia and booking a ticket to the semi-finals. Austria’s performance was also eye-catching, powering past triple IWC Silver medallists Poland to also reach this evening’s semis.

Austria and Iran will meet in the final four at 2030 (UTC / GMT +1), immediately following Germany’s semi-final match against Netherlands at 1900, which will be played in front of a sell-out 5,500 crowd packed into the Arena Leipzig. The men’s semi-finals take place immediately after the women’s semis, being part of a sensational second session of top class hockey on Day 4 at the Indoor World Cup.

Austria’s superb 5-1 win, in which ace striker Michael Körper scored twice, resulted in Poland failing to reach the tournament final for the first time in Indoor World Cup history.  “We made it really exciting throughout the first half because the match was so close”, said Austria Head Coach Tomasz Laskwoski following the win. “We took our chances and we deserved the chance to play in the semi-final. We want to win the title.”  Poland’s Philipp Weide said: “The disappointment is huge, so there is not much I can say at the moment other than to thank the crowd for their support.”

Robbert van de Peppel scored twice as the Netherlands overcame a strong challenge from Sweden to book their ticket to the final four. “The key to today’s win was our defence”, said Netherlands keeper Laurens Goedegeburre. “We didn’t let them create many chances and we took full advantage of the ones we had. In the last few minutes we just tried to play out the time, using our experience to get the win.” Sweden’s Joakim Björkman commented: “We never gave up, which is a positive, but I need to state that we made simple mistakes today and we should have made more from the chances that we had. The Netherlands deserved their victory.”

A huge, passion-filled crowd was present to watch Germany in action, and they were not disappointed as the home favourites stormed to an 11-2 win over Switzerland. Moritz Fürste scored four times in a match that was described by fellow scorer Fabian Pehlke as being “so much fun to play in.” Germany match captain Tobi Hauke also enjoyed the contest. “It was a super game. We are looking forward to our play-off tonight in front of this big crowd.” Switzerland’s Manuel Keller said: “We enjoyed the atmosphere. We knew that Germany were technically better than us, and in my opinion the gap was a bit too much. But, we take it as it as and will try to get fifth place.”

Iran were simply magnificent in their quarter-final against a Russian side that came into the event at number 3 in the FIH Indoor World Rankings and had claimed four wins and a draw en-route to wining Pool B.  The Iranians bounced back from 2-0 down to win 8-5, with Abbas Aroei and Mohammad Asnaashari both scoring hat-tricks. “Today we played like the real Iranian team”, said brilliant goalkeeper Sasan Hatami Nejad, who was in terrific form.  “We are glad to make the top four and it was a really unexpected win, but we know Russia very well as we have played them in several test matches.”  Russian shot-stopper Artem Dryanitsyn said: “We didn’t make enough of our chances, so this is really disappointing. Now we need to calm down and get ourselves ready for the fifth place play-off matches.”

9th /10th Place: Czech Republic claimed a ninth place finish at the Indoor World Cup with a 6-4 victory against Australia, a match which was a far cry from the 0-0 that the two teams played out in the pool phase. Lukas Plochy scored a hat-trick for the Chechs, with David Vacek also netting twice.

11th /12th Place:  South Africa came from a goal down to beat Canada 2-1, a result which sealed an 11th place finish here in Leipzig. Canadian veteran Kenny Pereira opened the scoring in the early stages before goals from Craig Haley and Matthew Fairweather ensured that the South Africans ended their tournament in winning fashion.