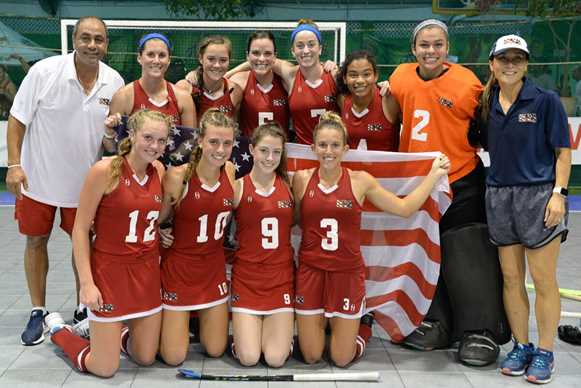 USA women and Trinidad and Tobago men will be representing the Pan American Hockey Federation at the Indoor World Cup in Germany in February.

It is the first time that either side has won this event and the fact that both teams are low in the world rankings (28th and 41st respectively) makes their achievement all the more special. Both teams will now represent the Pan American Hockey Federation at the Indoor Hockey World Cup, lending an element of surprise and the potential for some giant-killing exploits at the blue riband event.

“It was amazing,” said captain of Trinidad and Tobago, Solomon Eccles, after his team beat Argentina 7-0 in the final of the Pan American Indoor Hockey Championships to book a place at the Hockey Indoor World Cup in Berlin in February 2018.

“We came here knowing exactly what our game plan was and we stuck to it. We are unbelievably excited, we are like brothers, we have been training hard and at this point in time it doesn’t get any better.”

No less excited was Ali Campbell, player of the tournament and the tournament’s leading goal scorer. “It was incredible,” she said. “We have put in hard work, time and passion, this is overwhelming. Argentina is a brilliant team and it is always going to be a battle with them.

“Now we are going to celebrate and take our minds off hockey for a while, then we will come back ready to perform at the World Cup,” she said.

Trinidad and Tobago have been irresistible at this tournament as they maintained a 100 per cent win rate throughout. The form continued as they faced Argentina in the final. Mickell Pierre launched TTO into an early lead and Akim Toussaint doubled this a few minutes later after the TTO goalkeeper, Ron Alexander, pulled off two good saves to deny Argentina.

Pierre doubled his own tally just before half-time to give the TTO side a 3-0 lead at the break. Soloman Eccles was next to score, from a penalty corner and Marcus James made it 5-0. Argentina had a mountain to climb to get back into the game, and their attacking play meant gaps opened up which TTO were able to exploit ruthlessly. Akim Toussaint scored his second and Aiden de Gannes made it 7-0.

In the bronze medal match, Canada beat the host nation Guyana 4-2 to claim a bronze medal. This was a bitter-sweet ending for Canada as they came to the tournament with high hopes of a gold medal. In every edition of this event that Canada has entered, they have gone on to take the winner’s podium.

As the match got under way, the home crowd were momentarily exuberant as their team took a quick lead through Robert France but Canada were back in the match soon after with a blistering shot from Jonathan Roberts. The game see-sawed for much of the first half and finished 2-2.

In the second half, Canada really took a hold of the game and, despite some Guyana forays into the circle, goals from Gurtej Dhaliwal and Roberts saw Canada take a 4-2 lead and ultimately, the bronze medal.

The women’s final was a resumption of battle between the two Pan Am giants, USA and Argentina. United States started the match with a slight edge haven beaten Argentina 4-2 earlier in pool play but it was Argentina who came closet in the opening exchanges. However, this was a tight defensive match and at half-time neither side had broken through.

In the second half, it was USA who finally got onto the score-sheet. Katie Gerzabek slapped the ball home after some pretty passing play for the first goal of the match. Argentina struck back quickly, a seemingly innocent pass found its way to Emma Yanzi who sent a screaming shot past Samantha Carlino to equalise.

The USA wasted no time and drove up the field on the push back and were awarded a penalty stroke, which Ali Campbell stepped up to bury in the top of the goal to put the USA ahead. Despite USA being down a player for the final minutes of the game, there was no way the north Americans were letting go of their grip on the trophy.

The bronze medal match saw Canada lose to a determined Uruguay side. The final score 3-2 was reflective of just how hard-fought this game was. The score was 2-2 at half time but Uruguay took the lead early in the second half and then defended with everything to withstand a Canadian onslaught.