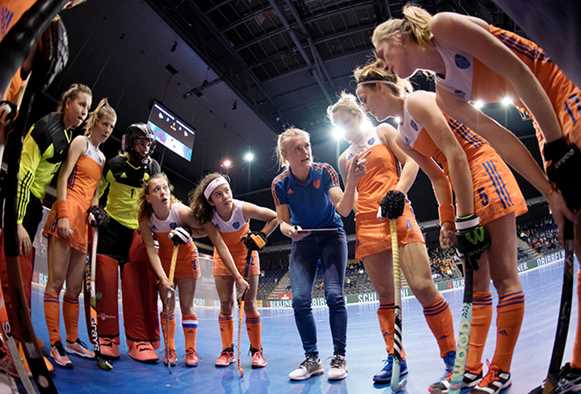 Netherlands women's Head Coach Marieke Dijkstra is aiming for back to back triumphs Photo: FIH/WSP

One game at a time for reigning champions Netherlands

Defending women's champions Netherlands arrived in Berlin on the back of two months of training and practice matches, which included picking up the silver medals at the 2018 EuroHockey Indoor Championships.

Head Coach Marieke Dijkstra is pleased with the way things have gone so far. The national hockey association, the KNHB, has been fully supportive of the Netherlands team’s indoor ambitions and the experienced coach, who is herself an Indoor World Cup gold medallist, says she has been working with a squad that is full of talent and ability.

"We are not as experienced as we were a couple of years ago so while, of course we are aiming for the highest, we see everything as a process.”
Marieke Dijkstra, Netherlands Women Indoor Head Coach

The depth of ability in the squad has allowed the Head Coach to put out a team with five changes from the EuroHockey Championship side and this, she says, will give her side a new dynamic.

“We have a squad of 17 very good players and we wanted to give as many as possible the chance to experience a big tournament. This has to be a developmental process, so we have a mix of young, new players and more experienced ones. Seven of the squad will have played in both the EuroHockey Championships and the World Cup, while five will play in one or the other.

“This is an unusual year as you don’t normally have an European championship and a World Cup within three weeks. We spent the first few weeks preparing for the Europeans and now we have turned our attention to the World Cup.”

As a player who has been to every Indoor World Cup, either as a player or, until now, an assistant coach, Dijkstra knows the pressure her players will be under, particularly as they have a title to defend. Her calm approach is simply to take one game at a time.

“On Wednesday we started with zero points against Switzerland. We actually lost to them at the EuroHockey Championships, so this was a chance to put that right. During the tournament we will focus on one game at a time. We will not be looking ahead and putting pressure on the team. We are not as experienced as we were a couple of years ago so while, of course we are aiming for the highest, we see everything as a process.”

In the lead-up to the Indoor World cup, the Netherlands played several matches against top Under-18 boys teams and also test matches against Australia, Ukraine and Namibia. Dijkstra is struck by the difference in style of the teams from outside Europe.

“They are much more physical than us. Not in a bad way, in a very different way.

“But you will also see a lot of teams play a very similar style, a lot of teams don’t put pressure on the ball, they sit back half way up the pitch and defend strongly. The skills of all the teams are very good though.”

When asked which teams might be successful, Dijkstra said there were many teams who could do well. She said the quarter-finals were all important as so much rested on that one game. “I am curious about Russia,” she added. “They were relegated from the EuroHockey Championships but they still played very well, they could do well.”

Fans can follow all the matches from the main hall in Berlin via a free live-stream on FIH YouTube.