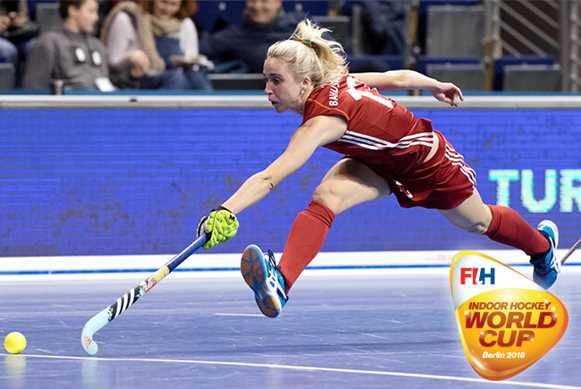 Berlin, Germany: The Netherlands, Belarus, Germany and Ukraine all made strong starts to their title challenge on the opening day of the 5th Women’s Indoor Hockey World Cup 2018, which is taking place at the Max-Schmeling-Halle in Berlin.

Reigning world champions the Netherlands (FIH Hero Indoor World Ranking: 1) and Belarus (WR: 5) finished Day One with two wins apiece to occupy the top two positions in Pool A. The Dutch claimed a comfortable 5-2 victory against Switzerland (WR: 19) before overpowering Kazakhstan (WR: 12) 7-0, with Kiki van Wijk scoring three goals throughout the course of the day. The results were enough for Marieke Dijkstra’s team to end the day sitting in first place due to a superior goal-difference over Belarus, who claimed a 4-1 win over USA (WR: 20) before beating Switzerland 5-1.

“We hoped that we would get six points today, but we knew Switzerland would be tough as they beat the Netherlands in the European Championships last month”, said Belarus Head Coach Herman Kruis, the man who guided the Dutch to the Indoor World Cup title at Vienna 2007. “We will discuss today’s matches this evening and also plan for tomorrow when we play the Netherlands. For me, the most important thing is that the Belarus team improves every tournament. We started with two wins and we will take it match by match, but I think tomorrow will be a very heavy day.”

Poland (WR: 4) currently occupy third place in Pool A having claimed a win and a draw in their opening matches. Team captain Marlena Rybacha scored twice in a 4-1 triumph over Kazakhstan, although they were held to a surprise 1-1 draw by USA, the lowest ranked team in the competition. The influential Rybacha was again on the score-sheet for her side, but Paityn Wirth’s 24th minute field goal gave the talented, youthful USA a share of the spoils.  The Americans sit fourth in Pool B, ahead of Switzerland and Kazakhstan, who are in fifth and sixth places respectively.

In Pool B, home favourites Germany (WR: 2) made a clear statement of intent with two hugely impressive victories, crushing Russia (WR: 17) 8-1 before netting 12 unanswered goals against Namibia (WR: 14). No fewer than ten different scorers registered for Die Danas throughout the day, with Viktoria Huse thrilling the partisan crowd with a personal haul of four. Their +19 goal difference ensured that they finished the day at the top of the table, although second-placed Ukraine (WR: 7) also grabbed a pair of wins. Ukraine were given a stern test by Australia (WR: 8) in their opening match, fighting back from 3-1 down to triumph 4-3 thanks largely to three goals from team captain Yana Vorushylo, who also scored twice in a 6-4 victory over Russia.

Australia bounced back from their defeat against Ukraine to claim a superb 2-1 victory over Czech Republic (WR: 3), stunning their higher-ranked opponents with goals from Lisa Farrell and team captain Shelley Watson. However, the Czech side’s earlier 6-2 victory over Namibia ensured that they ended the day sitting third in the pool, one place higher than the Australians. Russia and Namibia ended the day without any points but will be looking to change that when they return to action on Thursday 8th February, when another 12 matches in the women’s competition will take place across the two pools.