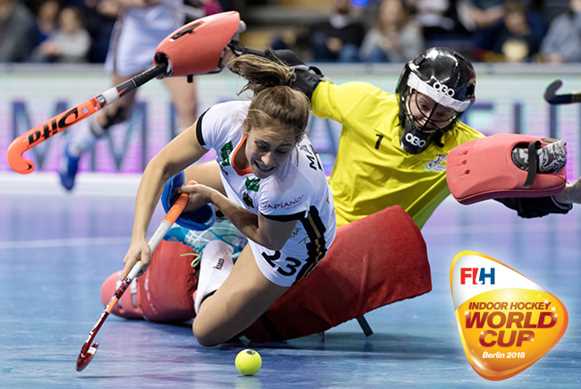 Berlin, Germany: The Netherlands and Germany both maintained their 100% win records on Day Two of the 5th Women’s Indoor Hockey World Cup 2018, which is taking place at the Max-Schmeling-Halle in Berlin.

The Netherlands (FIH Hero Indoor World Ranking:1) continued their excellent start by making it four Pool A wins out of four by defeating Belarus (WR:5) and Poland (WR:4), two sides that put up significant resistance against the reigning champions. Belarus matched their opponents for long periods of the contest, with Dutch shot-stopper Alexandra Heerbaart making a string of crucial saves before the Netherlands eventually ran out 4-1 winners with goals coming from Lieke van Wijk (2), Pien van Nes and Donja Zwinkels. Van Wijk and Van Nes were also on target for the Netherlands in their narrow 4-3 victory over a Poland team inspired by captain Marlena Rybacha, who scored a hat-trick but still ended up on the losing side as the Dutch opened up a three point lead at the top of Pool A.

“I think we can improve some things but I’m very happy that we won this morning’s game against Belarus because I think they are a very strong side”, said Netherlands Head Coach Marieke Dijkstra, reflecting on another positive day for her team. “We were aiming to get first in the pool so it was important that we won the Belarus game, and our goalie (Alexandra Heerbaart) did an amazing job to stop them from scoring more. We weren’t able to score a lot of goals against Poland so the game got a bit tense, but I’m pleased we got six points today.”

Belarus bounced back from their Dutch defeat to cruise to a 8-0 triumph over Kazakhstan (WR:12). Sviatlana Bahushevich and Yuliya Kurhanskaya both scored twice to ensure that they ended the day sitting second in Pool A ahead of the final round of pool matches on Friday, which will establish the line-up for the quarter-finals.

Switzerland (WR:19) reignited their chances of a berth in the quarter finals with two wins on Day Two, defeating Poland 3-1 in the morning before achieving the same scoreline against USA (WR:20) in the afternoon to end the day third in Pool A. The Wälti sisters were all heavily involved in the Poland success, with captain Stephanie scoring while goalkeeper Flurina saved a penalty stroke conceded by Alexandra. USA - 7-1 winners against Kazakhstan earlier in the day - sit fourth in the pool ahead of fifth-placed Poland on goal-difference, with Kazakhstan in sixth place and out of the running for the quarter-final places.

In Pool B, Germany (WR:2) maintained complete control with another two victories, comfortably beating Ukraine (WR:7) 6-0 before being pushed all the way Czech Republic (WR:3) in their evening match. The home favourites edged to a 2-1 win over the Czechs thanks to goals from Luisa Steindor and Cecile Pieper, although Barbora Haklova’s 32nd minute strike set up a tense final eight minutes for the Germany team and their loyal supporters in the Max-Schmeling-Halle.

“We knew before the game that they are a really good opponent, finishing third at the last (Indoor) World Cup and they beat us recently at the Europeans”, said Germany's Franzisca Hauke. “It wasn’t our best match but we are happy that we won and can start to look forward to the quarter-finals.”

Germany’s victory confirmed them as the winners of Pool B with a match to spare, meaning that they are now guaranteed to meet the team that finishes fourth in Pool A in the quarter-final phase. The team that currently sits second in Pool B is Australia (WR:8), who recovered from a 3-3 draw with Namibia (WR:14) to claim a vital 2-1 win over Russia (WR:17) thanks to two goals from captain Shelley Watson.

“For us it was a step up from this morning, and that was something that we definitely needed to work on”, said Australia’s Emma McLeish immediately after the Russia match. “To come away with that win today is absolutely incredible. It keeps our competition alive.”

The Australians have claimed seven points from their four matches, and sit one point above both third-placed Czech Republic and fourth-placed Ukraine (WR:7) who are separated by goal-difference. The Ukrainians fell to a shock 3-2 defeat at the hands of Namibia in the final women’s match of the day, with Gillian Hermanus scoring a dramatic overtime winner to upset the World Rankings and boost Namibian hopes of a place in the quarter-finals.