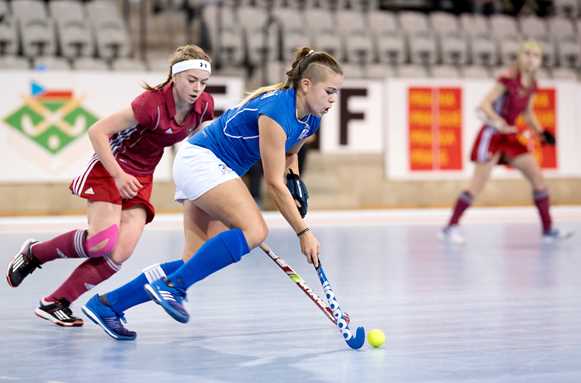 The sports stadium will play host to 80 international matches, with 24 games taking place each day on the first two days of competition. In total, 24 teams are participating, 12 men’s teams and 12 women’s teams.

Among the participating nations are the current title holders, Netherlands women; the newly-crowned EuroHockey Indoor champions, Germany women; Germany men, who have won three of the four previous editions; and tournament debutants USA women and Kazakhstan men. The current men’s title holders, the Netherlands, failed to qualify for this event.

The competition format comprises pool matches, followed by cross-over quarter-finals involving the top four placed teams in each pool. The winners of the quarter-finals progress to semi-finals and contest places 1-4; the other four teams play for positions 5-8.

In the women’s competition, the reigning Indoor World Cup champions, the Netherlands, will be the team to beat. With head coach Marieke Dijkstra, they have an experienced leader. Dijkstra was part of the gold medal winning team of 2007 and her team has never failed to make a final in this event. The team lost to Germany in the recent EuroHockey Indoor Championship but with five changes to that team, they will be looking to retain their title in Berlin.

Marlena Rybacha, captain of Poland, will be seeking to re-establish her team as one of the leading lights of the indoor game. A poor performance at the 2018 EuroHockey Indoor Championships saw the Polish side finish last but this is a side with far more potential than they showed at the EuroHockey event in Prague in January and they will be seeking a podium finish.

Belarus took bronze at the EuroHockey Indoor Championships in January, beating the higher ranked Czech Republic in a tightly contested match. This is a team with players that can score goals; Yulia Mikheichyk and captain Ryta Batura’s performances in recent games epitomise the Belarus attacking approach.

Asian champions, Kazakhstan will be looking to do better than their two previous appearances at this event. In both 2011 and 2015 they finished 12th but, having enjoyed some good recent performances, they must be eyeing a top four finish in the pool this year.

Switzerland might be ranked 19th in the world but at the 2018 EuroHockey Championships they beat the Netherlands and had some other impressive results against higher-ranked opposition. There is a distinctly family feeling to the Swiss line-up with three sisters, Alexandra, goalkeeper Flurina and captain Stephi Walti all in the team and mother, Monika Walti in her role as team manager.

The sixth team in Pool A is the USA, who are making their debut at this event. The lowest ranked team in the competition is also the least experienced with nine teenagers making the trip to Germany. That said, this is a team brimming with confidence after they won the 2017 Indoor Pan Am Cup with seven straight victories. Expect Ali Campbell to shine once more – the 26 year-old scored 19 goals in seven games at the continental championships.

Over in Pool B, Germany will be looking for their third win at this event. The team won the recent 2018 EuroHockey Championships, with a side that is very different in composition to the one contesting the World Cup. Captain Janne Müller-Wieland admits this team has only played together once before. The experienced defender says, although they have potential, it’s whether they can come together over the course of the tournament. However, with stars such as Marie Mavers, Luisa Steindor and Anne Schroeder on the team sheet, this is a team that is more than capable of lifting the trophy.

The Czech Republic endured the pain of a fourth-place finish at the 2018 EuroHockey Championships and will be seeking to be among the medals this time. A bronze in Leipzig in 2015 was well-deserved and there is no reason they cannot repeat that feat. In captain Adela Lehovcova they have an inspirational leader.

Bronze medallists in 2007, Ukraine are one of a number of challengers from Eastern Europe. The team is led by Yana Vorushylo, who was part of the successful 2007 unit. Head coach Svitlana Makaieva has selected a squad packed full of experience.

Oceania champions Australia have a solid history at Indoor Hockey World Cup events. The team’s sixth place finish in 2007 was their best to date but with Australia, you always know they set out their stall to win. Shelley Watson brings the experience gained from three previous World Cup appearances and Lauren Austin will be looking to get her name on the score-sheet with her usual regularity.

Namibia are making their second Indoor Hockey World Cup appearance after a 10th place finish in 2011. The African champions beat South Africa to the title after holding the red-hot favourites to a 3-3 draw and then winning the shoot-out. Magreth Mengo, Marcia Venter and Jerrica Bartlett are the experienced trio from the 2011 campaign.

The sixth team in Pool B are the Russian challengers. In Valeriia Borisova, the team has a fantastic young player, who showed her ability to create and score goals at the 2018 EuroHockey Championships. Borisova netted 10 times in five matches. Bogdana Sadovaia is another team member with an uncanny knack for scoring goals. She represented Ukraine at the 2007 Indoor World Cup, so brings her experience to the tournament.

The opening day of action sees Ukraine take on Australia at 9am(CET). For the full playing schedule and reports from the day's action, visit the event page on FIH.ch