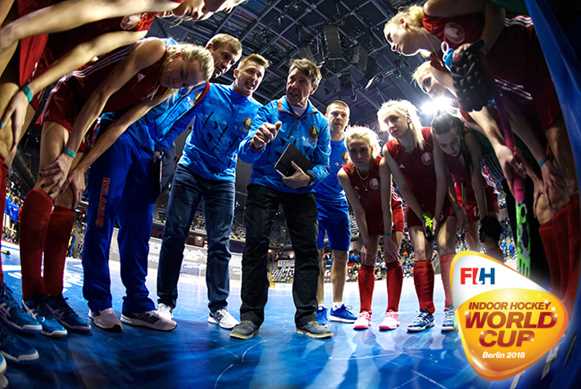 Berlin, Germany: Belarus, Germany, Ukraine and Netherlands have secured their places in the semi-finals of the 5th Women’s Indoor Hockey World Cup 2018, which is currently taking place at Berlin’s Max-Schmeling-Halle.

More information about the quarter-final matches can be found below.

Belarus 5, Australia 2.
Australia (FIH Hero Indoor World Ranking: 8) produced a valiant display but could not join their male counterparts in the competition semi-finals, going down to a 5-2 defeat against in-form Belarus (WR: 5).

There was very little to choose between the two sides in the first half, with Pool B runners-up Belarus twice leading through goals from captain Ryta Batura and Yulia Kikheichyk only for Australia, who finished third in Pool A, to level thanks to strikes from Shelley Watson and Karri Somerville.

The Belarusians took their game to another level after half time, with Nastassia Syrayezhka and Maryna Nikitsina moving the score to 4-2 before Australia went for broke by replacing their goalkeeper with an outfield player. It was a tactic that almost paid off when Australia rattled the frame of the goal with five minutes remaining, but their hopes were finally ended when a rapid Belarus counter-attack was passed into an open goal by Yulia Kurhanskaya to complete the scoring.

“I think we played a controlled match”, said Belarus Head Coach Herman Kruis after the game. “We saw Australia’s match against Germany yesterday and identified some possible weaknesses. We knew we needed to produce some quick transfers to exploit those weaknesses and the girls did it very well.”

Ukraine 8, Switzerland 3.
Pool B runners up Ukraine (WR:7) booked their ticket to this evening’s semi-final matches with a superb 8-3 triumph over Pool A third place finishers Switzerland (WR: 19), with their performance in the second half being particularly impressive.

The two sides traded blows in an entertaining first period, with Switzerland’s Stephanie Wälti twice pulling her team level after goals from Yana Vorushylo and Maryna Khilko. Vorushylo made it 3-2 to Ukraine on the stroke of half time before her team stepped up the pace considerably in the second half.

The Ukrainians scored five times without a Swiss reply, with Khilko completing her hat-trick alongside goals from Yulia Shevchenko, Katerina Shokalenko and Viktoriia Stetsenko before Switzerland’s Linda Haussener netted a superb field goal to complete the match scoring. Ukraine are clearly in confident mood and will fancy their chances of success in the semi-finals later today.

Germany 3, Poland 1.
Germany, the winners of Pool B, reached the last four of the competition by recording a 3-1 victory over Pool A’s fourth-placed team Poland, where the large and extremely vocal partisan crowd made their presence felt throughout.

Poland produced a far better performance than what was predicted based on their pool placement, seemingly unintimidated by the terrific noise being generated by the home fans. They hold the hosts back until the 13th minute when Lisa Altenburg fired home. Die Danas doubled their advantage on the stroke of half time thanks to a cool finish from Marie Mävers, although Poland hit back two minutes after break when Oriana Walasek slammed home a penalty corner. Any anxiety amongst the players and fans of Germany disappeared in the 25th minute thanks to Altenburg, who nicked the ball from a Polish defender and fired through the legs of Polish shot-stopper Dominika Nowicka to score her second goal of the game and put Germany into the semi-finals.

“The atmosphere in the hall was fantastic”, said Germany’s Marie Mävers after the match. “We were a little bit nervous before the match because we have never played in front of such a crowd. We started well and are happy to win but we have to be better going into the semis.”

Netherlands 8, Czech Republic 3.
Reigning world champions the Netherlands (WR: 1) produced a devastating first half performance in their 8-3 victory over Czech Republic (WR: 3) to keep their title defence very much on track.

The winners of Pool A have been in sparkling form here at the Max-Schmeling-Halle, something which very much continued against the Czechs when Gabrielle Mosch, Elin van Erk (2) and Pien van Ness took the score to 4-0 going into half time.

Czech Republic were much improved in the second period and reduced the deficit to 4-2 thanks to efforts from Renata Capouchova and Barbora Haklova, breathing new life into their own hopes of reaching the semi-finals. Noor de Baat put the Netherlands into a 5-2 lead moments before Katerina Lacina made it 5-3 to keep the Czech dream alive. However, with Czechs chasing the game, the Dutch scored three breakaway goals to kill the contest and book their ticket into this evening’s semi-finals.


As well as the quarter-finals there were also two classification matches played this afternoon. Namibia claiming a ninth place finish at the event thanks to a shootout victory over USA while Russia defeated Kazakhstan in the 11-12 classificaction match.