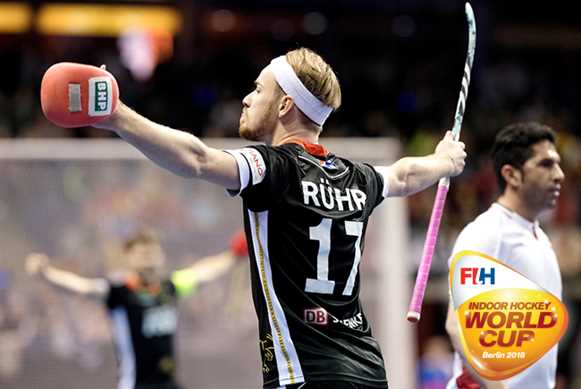 Ruhr runs riot for Germany and Korper shines for Austria

It was the Christopher Ruhr show as the competition's leading scorer added another three to his tally (18) as Germany booked their place in the gold medal match. Joining the host nation in the final of the 5th Men's Indoor Hockey World Cup are Austria, who put paid to Australia's hopes.

In the first semi-final of the day, the world number one side Germany and Iran (WR:7) walked out into the cauldron-like atmosphere of the Max-Schmeling-Halle to the noise of nearly 8,000 ardent hockey fans. If the home nation were nervous it didn't show as they went straight into attack mode.

The attacking press slowly stifled the Iran team and Germany earned a penalty stroke with four minutes played. At this point, perhaps a moment of nervous tension crept in, as Christopher Ruhr sent his shot high over the bar. Ruhr atoned just seconds later as he flicked the ball over goalkeeper Sasan Hataminejad to give his side the lead.

Three minutes later and Alexander Otte attempted to flick the ball in a similar manner. The saved shot rebounded to Fabian Pehlke who slammed home to double the German lead.

Ruhr scored his second from an acute angle, although the Iranian goalkeeper Hataminejad will be annoyed that he let a relatively easy shot go past him.

Iran came back in the 20th minute when Navid Taherirad pounced on a rebounded ball and shot past Tobias Walter in the German goal, giving Iran a confidence boost going into the half-time break.

Classic counter-attacking play was behind Germany's fourth goal, which came in the 23rd minute. Walter saved from an Iranian attack, the ball bounced to Tobias Hauke, who found Ruhr. The scoring machine turned the defender marking him and made no mistake as he shot home.

As the second half counted down, spaces began to open across the pitch as Iran sought a way back into the game. This gave the German team licence to play some lovely connecting passes. As has been the case throughout the competition however, Iran's players dug deep across the pitch to shut down Germany's attack.

Iran came back with a second goal with five minutes left on the clock. A foul in the German circle gave Iran a penalty stroke and Reza Norouzzadeh made no mistake as he sent Walter the wrong way.

The game was all but over when captain Martin Haner made it 5-2 from a penalty corner. The icing on the cake was a final minute goal from Ferdinand Weinke, who rarely scores but made no mistake as he slotted the ball smartly past Hataminejad.

"We used the energy of the crowd, it certainly wasn't a problem with nerves," said Haner after the game, "But at times it was so loud out there we has trouble communicating. It was something we had to get used to but we won't find it a problem in the final. For now, we are going to relax, have a lot of sports massage treatment, watch the other semi-final and get some rest."

Two very different styles of play were evident in the second semi-final as Australia (WR:11) brought their route one game and Austria (WR:2) focused on a strong defence from which to build.

For the first 19 minutes of the game, the two styles cancelled each other out. Australia attacked and Austria defended and, although it was intriguing, there was no breakthrough on either side. It took until the 20th minute for the deadlock to end. Austria's talismanic captain Michael Korper opened the scoring with a trademark penalty corner on the stroke of half-time. His ferocious penalty corner flew past Banjamin Rennie to send his team into the break on a high note.

In the second half, Australia found their touch as Jack Hayes burst through the centre of the field and found James Knee who slammed the ball home for an equaliser.

The danger-man that is Korper struck again to put his side 2-1 up. The slipped penalty corner strike, which keeps proving so successful for Austria, evaded Rennie's outstretched leg to nestle in the bottom corner of the goal.

Rennie was on high alert as the clock ticked down and he pulled off a tremendous reaction save when Banjamin Stanzl whipped in a searching shot.

At the other end, Jake Sherren was unlucky as his glancing shot flew just wide of Mateusz Szymczyk's goal. A few seconds later Australia won a penalty corner but the shot went wide.

Australia spent the last two minutes seeking a break through the disciplined Austrian defence. The team in gold and green played with an increasing sense of urgency but their forays forward were tempered by the knowledge they could not afford to concede. The tension on the pitch was palpable from both sides.

Despite the best efforts of Australia, the Austrian defence held firm and they booked themselves into a final that will be a re-run of the semi-finals of the EuroHockey Indoor Championships just one month ago. On that occasion Austria won on shoot-out and went on to become European Indoor Champions. 2018 would be a very special year for Korper and his team if they repeated that feat at World Cup level.

For Russia, this was a consolation prize after they dropped out of the quarter-final qualification spots on day three. Their 3-2 win against Trinidad & Tobago included two goals for Pavel Golubev.

Russia's ninth place finish is their lowest finishing place since 2003, when they also ended in ninth position.

For Trinidad & Tobago, 10th place is their highest finish at the Indoor Hockey World Cup [in 2007 they were placed 12th].

The final day of action at the 5th Men's Indoor Hockey World Cup will see Australia and Iran battle for bronze at 12:00 then Germany will play Austria in the gold medal match at 15:00. (All times CET - Central European Time).