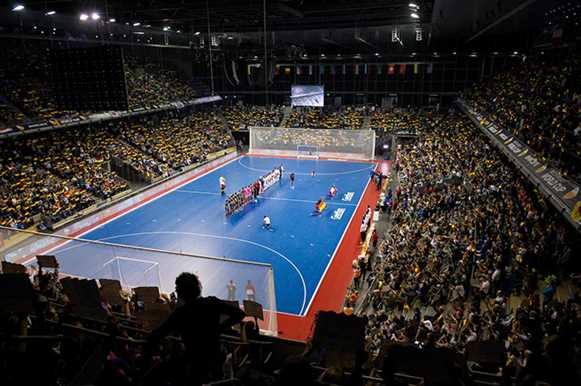 The players emerged onto the pitch through a tunnel of flames; an indoor hockey record breaking 8,000 fans were cheering themselves hoarse; red, gold and black flags waved in time to the music that was bellowing through the loud speakers; the stadium commentator roared each player’s name as they entered the arena. This was hockey at its very best – big, bold, packed and loud!

The action on the pitch was just as heated. The women’s final between Germany and the Netherlands saw the host nation hit their top form at just the right time. Where Netherlands had sailed through each stage of the competition, Germany needed to dig deep, but on the night it all went right. They won 2-1 and fittingly, Best Player Anne Schröder and Rising Player Nike Lorenz were the two scorers.

In the men’s final it went to the wire. Germany looked unassailable until Michael Körper dragged Austria back into the game. The score was 3-3 at full-time and Austria held their nerve to win the shoot-out.

"8.25 million people watched a highlights clip from the Finals on Tagesschau"

With all such competitions, ensuring things run smoothly is essential. A huge team of people combine to make an event happen. There are the pitch officials – umpires and technical officials – all volunteers although completely professional in their roles. Behind the scenes there is the huge army of volunteers who looked after the players, cleaned the changing rooms, provided information and generally made sure everyone had a good time. In the media centre, journalists, photographers, bloggers and web-site editors gathered to make sure every second of action was reported, ensuring that the millions of people following the event around the world were always up-to-date with the action.

Getting people to watch the fifth Indoor Hockey World Cup was always going to be a challenge – the event in Berlin was competing with the Winter Olympics and the Bundesliga: one a globally popular international event and the other a superbly supported domestic event that also reaches worldwide soccer audiences. How was hockey going to compete?

The organisers at the Max-Schmeling-Halle need not have worried however. The extended seating offered 8,000 seats and everyone of them was filled on finals day. This in itself was a record sized crowd for Indoor Hockey. The queues around the exterior of the Halle would have brought a smile and a sigh of relief to the organising committee. Yes, there might be fireworks in PyoengChang but here in Berlin, on this finals day, all thoughts were with Die Danas and Honamas.

The total viewing figures from around the world are still being compiled but for the German coverage, it was good news. It was not simply the people in the stadium who were tuning into this exciting event.

In the roundup sports show, RD Sportschau, later that day, 3.14 million people watched the five minutes of highlights from the competition, with a further 8.25 million watching a shorter version on Tagesschau. That is the reach of the Indoor World Cup to German audiences.

Another indication of just how successful this Indoor Hockey World Cup has been can be seen in some of the headline figures from the FIH social media platforms which received:

These figures indicate the level of excitement that built around the world as the Indoor Hockey World Cup moved towards its exciting climax. People from across the planet tuned in on the various channels to find out how their heroes were performing. And for those people who were actually there, the noise, the atmosphere, the excitement and, above all the hockey action, made the Indoor Hockey World Cup a magical sporting moment to remember.

Days after the seats have been dismantled and the floors swept clear of discarded flags and banners, the sound of “die perfeckte Welle” is still ringing around this correspondent’s head.