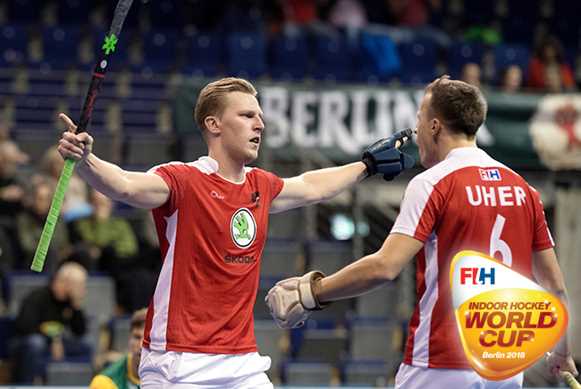 The opening day of the 5th Men's Indoor Hockey World Cup saw two impressive winning performances from hosts Germany (FIH Hero Indoor World Ranking:1) as they hit the ground running with a comprehensive 15-0 win over Kazakhstan (WR:16) and a 7-1 goal spree against Australia (WR:11). The result puts the three-time World Cup winners in the driving seat in Pool A.

Also going well in Pool A is the Czech Republic (WR:6) who beat Trinidad and Tobago (WR:18) 7-2 before turning the screw on Kazakhstan in their second game. The Czech team turned a close 4-2 half-time scoreline into a 9-3 rout by the time the final whistle sounded. The high scoring Czech team were led from the front by Jakub Lyndl, who scored seven goals – five of them against Kazakhstan. These results leave Czech Republic in second place in the pool behind Germany on goal difference.

Despite a surprise 5-3 loss at the hands of Australia, Poland bounced back in some style against Trinidad and Tobago. A match that saw the Pan American team take an early 3-0 lead was turned on its head as Poland brought the score back to 3-2 going into the break. The European team then took control of the game and enjoyed an eight goal scoring fest in the second half to run out 11-5 winners. Trinidad and Tobago were their own worst enemies as they lost two players to yellow cards during the match and thus spent a large amount of the game a player down. The result leaves Poland sitting third in Pool A.

Australia enjoyed mixed fortunes on Day One, finishing on equal points with Poland but with an inferior goal difference. The Oceania representatives defied the world rankings to beat Poland (WR: 5) 5-3 – a match that saw Poland play almost 10 minutes with a kicking back as they sought to get back on terms. However, the Australian's were undone by Germany's sheer brilliance as they simply couldn't find their way out of the tight German attacking press.

In Pool B, Austria's (WR:2) opening game was a chance to prove their class as they beat Belgium (WR:16) 7-2 and then emerged as 6-3 winners against South Africa.

Second place in the pool currently belongs to Iran (WR:7) who continue to impress at this level as they beat Switzerland 5-1. A second win eluded them as they found Belgium in determined mood not to lose a second consecutive match. Play flowed back and forth with missed chances, courageous defending and great goalkeeping on display throughout. In the end nothing could separate the teams and they played out a 3-3 draw. The result leaves Iran in second place and Belgium fifth, ahead of South Africa who have yet to register a point.

Speaking after their opening game, Iran's team manager Hadi Shariatisaravi, said: "We have worked really hard from the last (Indoor) World Cup in Leipzig, and this was what we wanted. We are going to finish first, second or third. We are going to do it, for sure. As we say, life is hockey and hockey is life, in Iran."

Russia were another team with mixed results. They were clinical as they put five goals past South Africa (WR:12) but they then lost an exciting and closely fought match against Switzerland (WR:8). The match was one of the most tightly contested of the day as the scores stood at 1-1 until the final two minutes of the game. Switzerland scored through Florian Feller and then found an empty net for a third goal as Russia removed their 'keeper to try to push for an equaliser. A superior goal difference puts Russia in third place in Pool B but Switzerland are snapping closely at their heels.