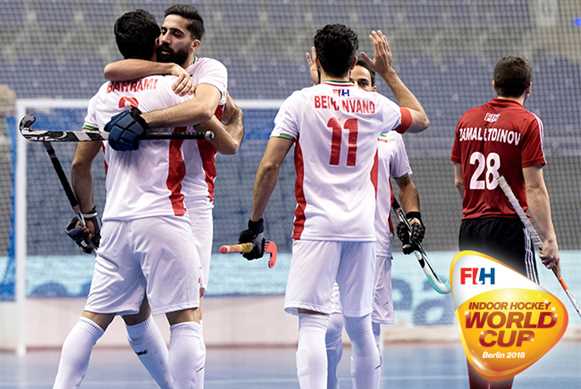 The quarter-finalists for the 5th Men's Indoor Hockey World Cup 2018 have been revealed after a thrilling last round of pool matches.

Going into the third day, there was all to play for as the standings in both pools were so close. Host nation Germany sealed their place at the top of Pool A with a 10-2 win over Trinidad & Tobago (WR:18). The team ranked number one in the FIH Hero World Rankings scored a highly impressive 44 goals in five pool games, conceding just 11.

Australia continued to impress at this event as they sealed their place in the quarter-finals with a comprehensive 6-1 win over Kazakhstan. Six goals, six different scorers is indicative of the team-centred approach of the Australian side and the result means the team from Oceania finished second in Pool A, ahead of two higher ranked teams.

The Czech Republic (WR:6) held onto their third position in Pool A thanks to a fighting 3-3 draw with Poland (WR:5). The final match of the pool round was a gritty affair with both teams chasing a higher finish, thus avoiding the top placed teams from Pool B.

Trinidad & Tobago have brought their own style and a vociferous following to this competition but finished out of the quarter-final places, with one win and one draw to their name. Kazakhstan finished bottom of Pool A after suffering five losses.

In Pool B, Iran (WR:7) finished their pool matches unbeaten after they defeated Russia (WR:4) 4-3. However, in an extremely tight pool, Austria (WR:2) held onto top spot by virtue of goal difference after they drew with a Swiss (WR:8) team who arrived at the Max-Schmeling-Halle determined to put some poor performances behind them.

The Red Lions of Belgium (WR:16) turned their early tournament form around with a strong display against South Africa (WR:12). Speaking after the game, which they won 8-2, Tom Boon said: "At the start of the competition we were not playing our best and we sometimes lacked fight but in our last two games we really picked it up and we are so happy to have qualified for the quarter-finals."

These results mean Russia and South Africa miss out on quarter-final qualification. While South Africa have been outplayed at this level of competition, for Russia the failure to qualify is heart-breaking as they came to the event with high hopes. Two wins put the Russian team in the mix until the final day of pool play but they fell at the final hurdle as Iran were just more fluid in attack and clinical in front of goal.

#IHWC2018
Keep up to date with live games at the 5th Indoor Hockey World Cup in Berlin using FIH's new 'remind me' calendar: