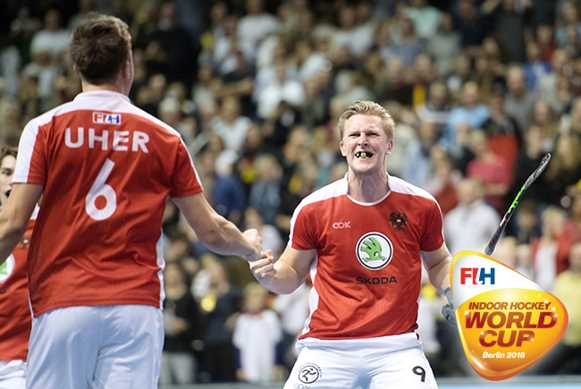 It was double delight for Austria as they added the Indoor Hockey World Cup title to the EuroHockey Championships gold they won in January.

it was the closest of finals as the match was drawn at 3-3 and then went to sudden death shoot-out. The hero of the hour was Austria's Michael Körper, who scored the winning goal in shoot-out, as well as a crucial equaliser during the final minute of the match.

It was a bitter sweet day for Rühr. He was voted Best Player and was also top scorer, beating closest rival Körper by 19 goals to 17. Best Goalkeeper went to Sasan Hataminejad of Iran and Rising Player award went to Fabian Unterkircher.

In the bronze medal match, Iran made history as they became the first non-European team to win a medal at the Indoor Hockey World Cup. The hugely talented Iranian team beat Australia with a classy display of passing hockey.

History continued to be made as the venue, the Max-Schmeling-Halle in Berlin played host to the biggest ever audience for an Indoor Hockey World Cup – 8,000 people passed through the gates to cheer their teams on.

And so to the matches.

Into a hall that was awash with German flags, Germany and Austria took to the pitch for one last match. The players entered through a tunnel of flames, which was fitting as this was a final that was intense, skilful, dramatic and played at a ferocious pace.

It was six minutes before a goal was scored and it was one that delighted the crowds. Germany won two penalty corners in quick succession and, although Christopher Rühr saw his shot well-saved by Mateusz Szymczyk in the Austrian goal, the second penalty corner was dispatched with deadly accuracy by captain Martin Häner.

Just a minute later and Martin Zwicker added a second. His goal was the result of fine individual skill as he pulled the ball back and then lifted it past Szymczyk.

Austria responded to this in the best way possible, with Dominic Uher rattling home a penalty corner in the ninth minute to bring the score to 2-1. The match settled into a rhythm for much of the remainder of the half but with two minutes remaining in the opening period a quick break by Austria saw Tobias Walter pull off a courageous save as Austria broke through via the nifty stick work of Benjamin Stanzl.

Seconds later, Walter's counterpart Szymczyk did exactly the same at the other end of the field to deny Fabian Pehlke.

Five minutes into the second half and Rühr added to the scoreline. He rattled home a penalty corner and as he roared in celebration it was clear just how much was invested emotionally in this match.

One thing was always certain, as EuroHockey Champions, Austria were not done yet. It was fitting that Körper should score and he added to his own tally and brought his team back into the game with seven minutes left on the clock.

What happened next is as dramatic as sport can get. With a few seconds on the clock Körper scored from a penalty corner and sent the match into shoot-out.

Both 'keepers have been outstanding all tournament and so they continued to perform as they took centre stage. At the end of the first round it stood at 2-2 and sudden death beckoned.

After a save apiece, it was Hauke's turn. His attempt was saved and it was almost a given that Michael Körper would be the player to seal champion status for Austria.

In the bronze medal match earlier in the day, Iran made history by becoming the first non-European country to win a medal at the 5th Men's Indoor Hockey World Cup.

They did it by sticking to their own unique style of incisive indoor hockey. The tactic that proved to be the undoing of Australia was the long diagonal pass out of defence that by-passed the Australia press.

For Australia, their energy and dynamism was on show but this was not to be their day as they hit the cross-bar and upright at crucial times in the game. The opening minutes of the match were cagey as the two teams tested each other.

Both teams played an open, passing game in the mid-court but tight defences at either end meant there was little in the way of goal mouth action.

This all changed in the 14th minute as Iran suddenly upped the pace. A blistering run down the right-hand side of the pitch by Reza Norrouzzadeh split the Australian defence and Navid Taherirad was on hand to push the ball smartly into the goal. Seconds later Taherirad nearly made it two as he was again left in acres of space and his shot rasped wide of the post.

As the half drew to a close an Australia player was given a green card and Iran made the most of their man advantage. Behdad Beiranvand took the ball wide on the left and slipped to Norrouzzadeh. As Benjamin Rennie attempted to block the shot, the ball bounced cruelly over the Australia keeper and rolled into the goal.

After the break Iran continued to turn the screw, moving the ball at pace and not giving Australia a chance to make those all important connections or get any sort of rhythm to their game. When Australia did break, the element of good fortune that is so important in hockey was missing. Jake Sherren skilfully created space of himself only to see his clever shot striking the cross bar and bouncing harmlessly away.

Iran put the game further from Australia's reach when Mohammed Asnaashari sped down the right-hand boards and slipped to Hamid Nooranian, who held his nerve to lift the ball over the head of the advancing Rennie.

Two more goals followed as Australia threw everything into attack. Iran were able to counter and Norrouzzadeh was able to complete his hat-trick.

Speaking after the game, an emotional Yaghoub Bahrami said: "This was the very best day of my life. To come here and hear the amazing crowds cheering for us and to go out and play like that. It is an incredible feeling and one that will be so important to hockey players back in Iran."

A poignant symbol of the enormously good spirit in which this tournament was played was the sight of the Iranian and Australian goalkeepers swapping shirts at the end of their match.

With packed, loud stadiums; fast, furious action; a new name on the trophy; a new continent standing on the podium, indoor hockey has just won a huge amount of new fans.