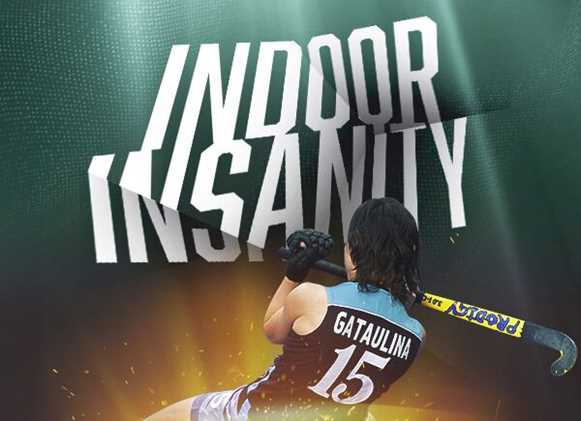 Are you ready for Indoor Insanity?

With the Indoor Hockey World Cup Berlin 2018 only a few weeks away, FIH is bringing you three weeks of Indoor Insanity as the world goes mad for the indoor version of the sport we love.

With the season already in full-swing in many countries we will be sharing indoor content each week as we build up excitement for fans looking forward to February's pinnacle event in Germany.

Over the next few days we will be sharing live action from Australia and Germany whilst also taking in some continental action in Europe. Here's some of the highlights we know of so far:

EUROHOCKEY
Antwerp’s 7,000 seat Lotto Arena is hosting this year's Men's EuroHockey Indoor Championships between 12-14 January. Top seeds Germany are possible favourites having won the Championships 15 of the past 17 years. They line up in Pool A with Denmark, Poland and the Czech Republic. World number two Austria are in Pool B with Russia (WR: 4), Switzerland (8) and Belgium (16). All games are live and free on www.eurohockeytv.org, with games getting underway on Friday at 10am (CET). The full schedule is available here.

As the Championship rumbles on in Antwerp, 15 more nations will be competing in the Men's EuroHockey Championships II (8 teams) and Championships III (7 teams). 61 games will be played indoors this weekend, over the three venues.

In the Men's EuroHockey Championship II being played in Alanya, Turkey - Turkey and Italy are the two promoted teams from 2016's Championship III. Both will be looking to consolidate their position in this Division, Turkey hoping that the home crowd will act as their extra man. However with Netherlands and Sweden now in the Championship II it is bound to be a tough ask for the newly promoted teams. The Dutch, (ranked 3rd in the world) narrowly missed out on a semi-final slot in 2016 therefore will be looking to get straight back into the top flight. Full match schedule here. Again, all games will be streamed live and free via our channel www.eurohockeytv.org.

AUSTRALIA
On the opposite side of the world, the Australian Hockey Indoor Festival is already underway in Goulburn, New South Wales. Fans can follow all of the interstate action live via https://hockeyaustralia.altiusrt.com or keep up to date by following Hockey Australia on Twitter.

GERMANY
Elsewhere in Europe, there's a number of German Bundesliga club matches being streamed over the next few days, with the next live match on Saturday 13 January from 13:20 (CET). Then, the winners of the German men's and women's indoor hockey championships will be decided in Stuttgart. The 57th finals of one of the best indoor hockey leagues in the world, also known as the Final Four, will take place over the weekend of 3-4 February in the SCHARRena. Defending women's champions UHC Hamburg and men's champions Rot-Weiss Cologne will be aiming to defend their titles there. For all the action from Germany, watch live here.

OTHER INDOOR COMPETITIONS
Over the coming weeks you'll be able to find all the latest indoor hockey live streams via social media channels, including FIH Facebook and Twitter. If anyone is streaming indoor hockey between now and 7 February, whether international or club level, please share your links with us by contacting nikki.symmons@fih.ch and we can share them with millions of fans across our social channels.

And remember, you can still buy tickets to see the world's best in action in Berlin, with the Indoor Hockey World Cup taking place every day from 7-11 February. Click here to purchase.