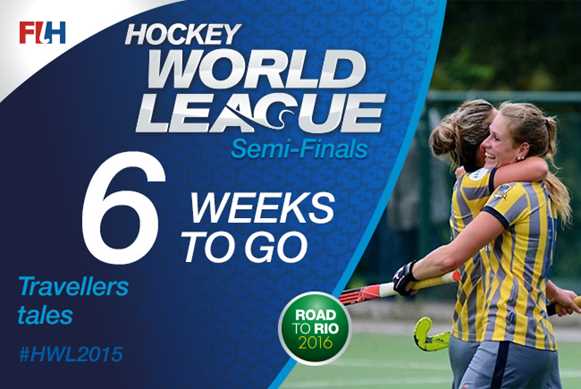 From Canada to Valencia via Belgium, Abigail Raye is putting in the miles to get her team to Rio.

Abigail Raye is certainly one well-travelled hockey player. The 23-year-old has been a main fixture in the Canadian defence since her debut against fellow Hockey World League Semi-Finalists Ireland in 2009. Since then, she has based herself for part of the year in Belgium, playing for Royal Wellington, while the remainder of the year is spent training and travelling with the national squad.

Referring to the challenges that lie ahead for the national team in the next few months, Abi, who was born in England but now has Canadian citizenship, positively bubbles with excitement: “I have had a fantastic time in Belgium, but now it’s 2015, a do or die Olympic qualification year. So I have to switch from the life of club hockey to international hockey. There are two roads of qualification for us: one through World League; and the other through our continental qualifier –  the Pan American Cup. Our Hockey World League campaign began in 2014, where we  came through Rounds one and two. The Semi-Final is in Valencia in June this year, where we need to finish in the top four to qualify for the Olympics. Our second road is through the Pan American Games that takes place in July in Toronto. We have to win the Pan American Games in order to qualify for Rio. Needless to say we have a huge year ahead.”

Talking about her overseas experience in Belgium and how it has impacted her own game, Abi, who is the youngest Canadian hockey player to reach 100 caps, says: “I’m hoping that my better game awareness and technical improvements will have had a positive direct impact on the team, and the ability to immerse yourself in the game and the experience of playing and coaching with an elite group of players week in, week out, is invaluable.”

But it is not all about the hockey. Abi is also a big fan of many aspects of Belgium’s culture: “There are many benefits to playing in Europe aside from all we learn on the hockey pitch. You get to experience living in a totally new city and culture. I got to explore Brussels and learn a little about Belgian culture, which does tend to revolve around around waffles, chocolate and beer, although not all at the same time.”

“I won’t claim to have learnt any French,” she adds, “but that’s next on my list. The social scene surrounding the clubs is great too. You get to meet loads of new people at your club and at other clubs.” Among the people she has met are South African players Tarryn Bright and Sammy Prost – both of whom will also be competing in Valencia.

As Abi’s ‘do or die’ year picks up pace, she gives a state of the nation report on Canada’s prospects. “The Canadian team is in a good place heading to the HWL Semi Finals in Valencia. We took a lot of confidence out of our performance at Hockey World League Round 2 in Dublin. After two years with our coach Ian Rutledge, we’ve nailed down our playing style and structure, so our preparation for Valencia is just about making some small adjustments. The squad has been training hard here in Vancouver and I think we’ll have the ability to surprise some teams in Valencia. As for the Pan Am Games in July, playing top quality opponents at the Hockey World League Semi-Final will be great preparation for us. We’ve had a busy year of hockey and we’re taking extra steps to accelerate our growth and improve ourselves every game.”