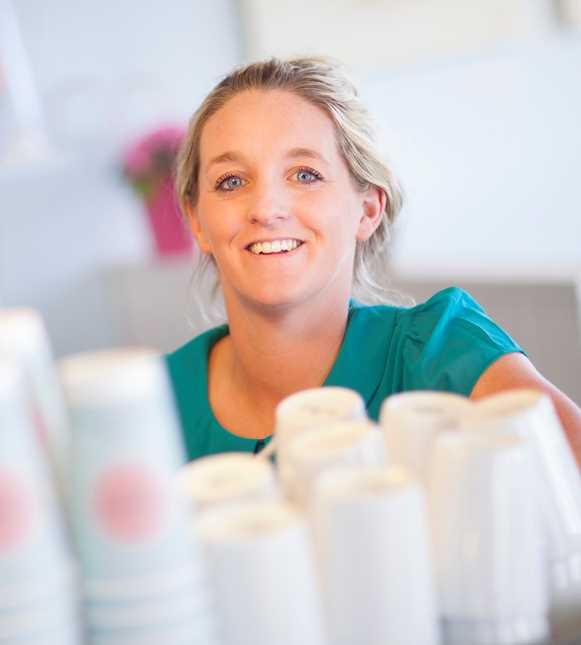 Ireland's Kate Dillon on life beyond the hockey pitch

For most hockey players, the “real world” of business begins long after their international career. Not so for Kate Dillon who earned her 50th cap for Ireland against Germany and turns 30 this week. We catch up with Kate on the eve of Ireland's quarter-final match against China at the Hockey World League Semi-Finals in Valencia.

She made her international debut in June 2013, a full three years after starting up her own business, The Wooden Spoon café in the Dublin suburb of Blackrock.

The colourful café serves homemade lunch and breakfast with stunning views of Dublin Bay while it prides itself on its gourmet coffee and chilled atmosphere. The company has also a number of offshoots, working with a number of hockey clubs for their catering needs.

Speaking about how she juggles the demands of an international hockey career and her business, she says its “quite demanding” but adds that “once I am organised I love being able to do both”.

This translates into 6am gym sessions followed by a full day’s work and pitch training in the evenings.

“Time management on a daily basis is hugely important. I have to plan my week in advance especially if we are travelling to ensure the business runs smoothly in my absence. I have a fantastic team who work in the shop and keep things running efficiently.”

Dillon has previously said that she is surprised by her late arrival to the Irish set-up. During her early 20s, she flirted with the outskirts of national training panels but felt she was “making up the numbers” for training games.

But current Irish coach Darren Smith was impressed by a run of form in the Irish Hockey League and Irish Senior Cup and duly brought her into the main panel at the age of 28. And Dillon says that having a successful business under her belt has taught her plenty of lessons that have helped her succeed on the playing field.

“I think in business it is the attention to detail that makes you be successful as well as hard work and knowing you can succeed.

“I find the same mentality applies to playing on an international team, as you need to be driven, focused and have a positive attitude at all times. I am passionate about both areas in my life and having a strong work ethic makes me feel like I can achieve this in business and hockey.”

Ireland’s players on the women’s side are currently all effectively amateur players but endeavour to play and train to a professional standard, combining their working or student life with top level hockey.

“Our setup in the Irish women's hockey team wouldn’t look out of place in a Premiership football club. We have a sports psychologist, physiologist, strength and conditioning coach, nutritionist and physiotherapist and this helps with organising my life to be able to maintain a full time job and playing elite hockey.

“I am not the only one with these time commitments. The entire squad share similar heavy workloads combined with training schedules.

“However, we also share the same drive, commitment and determination to do whatever we can do for the good of the squad. We know that we are one of the few teams that don’t have a semi-professional programme. If anything this teaches us to be even more self-responsible, self-driven and determined to be successful.”