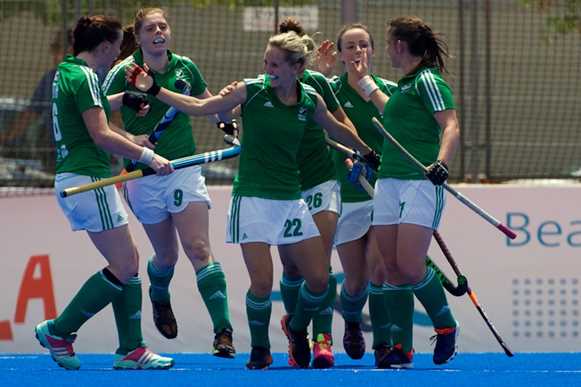 A hat trick for Ireland's Nikki Evans and Germany's Charlotte Stapenhorst, were the highlights of an exciting day of Pool B action in Valencia on the opening day of the Women's Hockey World League Semi-Finals.

In the first match of the day, the Green Army took just five minutes to break the deadlock, Evans ghosting to the right of the circle to clip home the opening effort. South Africa's Kelly Madsen levelled soon after with a deflection at the top of the circle but Ireland were back in front on 18 minutes via another Evans touch, this time from a deflection at a penalty corner.

South Africa had their chances to level in the third quarter but could not convert a pair of corners, won by the ingenuity of Dirkie Chamberlain. Ireland, meanwhile, took their chances with Evans diving onto the end of Chloe Watkins’ powerful cross in the 50th minute for 3-1.

Nicci Daly then completed the result with a spectacular solo goal, lifting the ball into the circle and cracking home on the volley.

After the match, Shelley Russell (RSA) said: “I think we will only get more control from here. The last game we played against Ireland was a loss so we need to get our mental game right against them. But it’s just the first game, it’s a long tournament ahead of us and we’re lucky with the format that we still have the quarter-final to aim for.”

Megan Frazer (IRL) said: “It was fantastic; what we aimed to do in our team talk, we executed exactly on the pitch and it showed in the second half. We had good control and were able to put it on the score sheet. Talking about Evans' hat trick, Frazer said: “ It sums her up; Nikki is an absolute workhorse. If there’s a chance of a goal, she will just throw herself at it. Whatever she has to do to get it in!”

In the second Pool B match, Germany cruised to a comfortable 8-0 win over Uruguay to get their World League semi-final campaign off to a great start in Pool B, scoring five goals in the first half to the set the tone.

Indeed, three of them came in the first quarter, Eileen Hoffmann volleying home after just a couple of minutes to start the goal rush. Nike Lorenz netted the first of a series of penalty corner goals before Charlotte Stapenhorst clattered home a close range finish which was awarded after a lengthy video referral.

Lydia Haase and Stapenhorst’s second made it 5-0 at the big break before back to back-to-back corners stretched the lead to seven – Stapenhorst’s third and one from Hannah Kruger doing the damage. Lisa Altenburg completed the win in the closing minutes.

After the match, Nina Hasselmann (GER) said: "We have never played Uruguay before but we were excited about it and I think we played a very good game, strong in the forwards and made many goals, so it was perfect for us."

The captain of Uruguay, Sofia Mora, added: "It is a new experience for us to play at this level. We know it will be difficult because it is our first time in this kind of tournament. We are going to do the best we can against teams like Germany and the USA. "We are growing slowly. We don’t have a water-based field so it is hard for us but it is really worth us playing this kind of even so we can grow more."