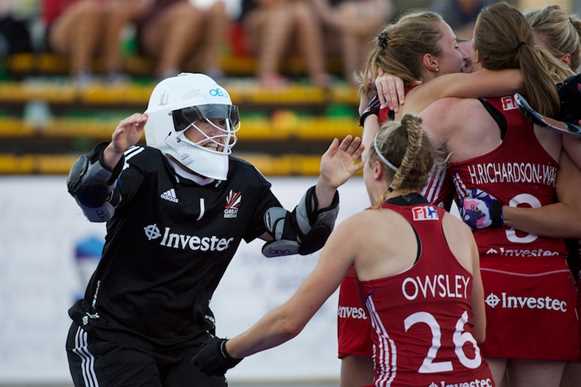 "Across the pitch people were willing to put their bodies on the line." This was the verdict of Helen Richardson-Walsh after Great Britain withstood a fraught final quarter to beat Germany in the second semi-final of the Hockey World League Semi-Final.

Lily Owsley’s seventh minute goal was all that stood between Great Britain and Germany as Great Britain earned their place at the Olympic Games in 2016 via a 1-0 win.

It was a fascinating game of cat and mouse with Great Britain taking the role of speedy counter-attackers and Germany the side with all the possession but less of the invention around the circle. As such, Lily Owsley scored from just such a counter-punch, a brilliant team move at pace that cut through the heart of the German defence. Helen Richardson-Walsh picked out Sophie Bray who located Owsley who controlled, a move that sent Kristina Reynolds too far across goal and the striker popped home for 1-0.

Nina Hasselmann almost got an instant riposte only to be denied by Maddie Hinch’s diving save. As Die Danas pushed on, though, they were more and more vulnerable at the back with Alex Danson and Bray wreaking havoc.

The latter embarked on a 70-metre run that ended with Danson chipping across the face of goal, ensuring the minimum margin reamined into half-time.

Eileen Hoffmann was denied by the width of the post with a behind the back deflection early in the second half while the Germans ran up a number of second half corners. Great Britain, meanwhile, should have done better with a couple of counter-attacks. In particular, Bray was set through one-on-one with Reynolds but the keeper stood tall and saved.

Several German corners were kept out in the closing stages, including two in the last two minutes, but Hinch was unbeatable for a fifth clean sheet in six games and Great Britain are off to the Olympic Games once again.

Jamilon Mülders, the German coach, said: “We had enough chances to turn things around, especially from the corners in the last quarter. There was a big difference in our performance in the first quarter compared to the last quarter.

“The will to win, speed and speed of the ball was a big difference to the earlier stages but there was not enough options at the corner. Maybe the luck we had two days ago we didn’t have today – that’s sport!”

"Today, it felt like it did pre-London," continued Helen Richardson-Walsh. "Every little hit, every bit of pain, the team worked so hard, but this feeling is worth it."

The midfielder, who has made a return to the squad following long-term injury, added: "This was the sort of game that makes you feel so tense. We really had our backs to the wall, everything boiled down to the final few minutes. To win this game was brilliant."