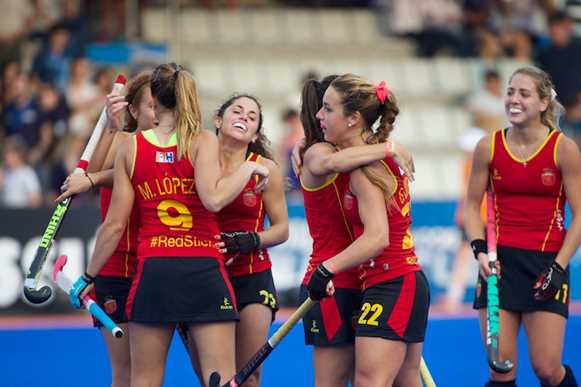 The second day of hockey in Pool B saw USA and Germany working hard to breakdown the stubborn defences of Uruguay and Ireland respectively.

The second day of hockey in Pool B saw USA and Germany working hard to breakdown the stubborn defences of Uruguay and Ireland respectively. Spain and Argentina were the victorious teams in Pool A, much to the delight of goalkeeper Maria Lopez de Equilaz. "I was ready to cry," declared the Spaniard after her team beat China in a tough 1-0 match.

In the other Pool A match, Argentina beat Pan-American rivals Canada 6-0, with a riveting display of attacking skills.

In their opening game of the HWL Semi-Final, USA's Rachel Dawson’s drag-flick and Kat Sharkey’s late goal gave the USA victory but the team had scratched their collective heads wondering how they could beat the diminutive Rosanna Paselle and her hard-working defence.

Speaking after the game, Paselle said: "It was a lot of hard work but we are pleased to have played an excellent match. It was good for us after yesterday. “Facing so many corners is no problem for me; I like it! We were all 100 per cent focused for this match, wanting to go better than we did against Germany. We hope to have more opportunities against Ireland and South Africa.”

The opening goal scorer, Rachel Dawson (USA) said: “It was definitely a battle for our first game of the tournament, one we can learn and grow from. We did come away with the three points and that is what these tournaments are all about.

“They are one of our Pan-Am competitors that we have seen in the past. They are a tough, talented team and we knew we would need to stick it out to get the result.”

In the second Pool B match, Germany held on for the second win of the tournament but they were made to work all the way in a classic battle with Ireland in Valencia in a 3-1 victory.

It was a thrilling match with three efforts bouncing off the post and both sides having to save shots off the line. Ultimately, two goals in quick succession from Anna Schroder and Marie Mavers in the third quarter proved all-important.

Anna O’Flanagan got one back but Ireland could not nab another to force a result before Lydia Haase nabbed a late third goal.

Ireland will count themselves unlucky, Kate Dillon had an effort disallowed after she tipped on to the post from Nikki Evans’s cross and Megan Frazer slammed a clever corner routine onto the post as the match somehow stayed 0-0 at half-time.

It was not the result that Shirley McCay – who celebrated 200 caps for Ireland – wanted. "We are a bit disappointed with the result but proud of the performance. We are disappointed to concede so late on when we had come back into the game. We created enough chances to nick a result, at least a draw. But they are European champions for a reason and they took their chances and were clinical.”

In the third match of the day, Agustina Albertarrio’s hat trick helped Argentina cruise to a comprehensive 6-0 win over Canada to start their World League campaign in great style.

"We found that tough," said Canada's Abigaye Raye after her team conceded six goals to their Pan-American rivals. "We will go away and re-focus for the next game. We have been a bit tentative in the opening two games, we need to play with a lot more confidence."

Florencia Habif opened the scoring 11 minutes in, and Albertarrio added her first three minutes later from a corner rebound. Noel Barrionuevo got in on the act soon after with a direct corner flick for 3-0. The second Albertarrio effort was a spectacular solo effort, beating the last defender before launching the ball into the roof of the net. Carla Rebecchi’s drag-flick accounted for the fifth goal while Albertarrio completed her triple in the 42nd minute from close range.

After the game, Albertarrio said: “We are really happy to win by such a big margin. As its only our first match, we want to keep building and building our performance but this was a good start. “I am really happy with my personal performance but, like I said, it is about the team and about us building on what we are doing.”

Lola Riera’s was hero of the hour for the host nation. Her brilliant low drag flick earned Spain their first win over China since 2006. She struck in the tenth minute in a fractious early spell.

Goalkeeper Maria Lopez de Eguilaz produce heroics with an excellent double save to keep out Mengyu Wang first up and then produced another fine stop from the same foe soon after. There was late drama when China thought they had earned a corner with 36 seconds remaining but they had one video review remaining and successfully argued for danger as Christina Guinea blocked a last ditch shot.

Spain became the fourth side in the group to sit on three points after day two of action in Pool A in Valencia.

China captain Cui Qiuxia was visibly disappointed as she spoke after the event: "That game is now finished and there is nothing we can do about it. Spain were strong, particularly in defence, and while our players played hard, they didn't score."

Maria Lopez de Eguilaz summed up her team's feelings after the game: “The last minute, I just wanted to cry. The final whistle, all the tension went away and I knew I didn’t have to do anymore. I am so happy; this was a really important game and we did what we had to do."

t we had to do. “Olympic qualification; this is why I am here! We came here to win; yesterday wasn’t the best game for us and we were a bit sad. But it is not how we start; it’s how we end!”