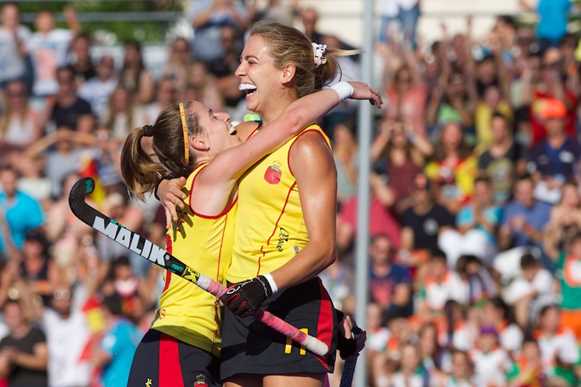 "We have been training for two years for this tournament," said Berta Bonastre, "And now we are here we want to show what we can do." And an equaliser in the penultimate minute of the match against the number three-ranked team, Argentina, was testimony to the transformation of the host nation over the past two years.

Earlier in the day, Great Britain made it four wins from four as they scored in the first and last four minutes of the game to get the better of China 2-0. They top Pool A with a perfect record, meaning they will play South Africa in the quarter-final.

Great Britain versus China was a game of few chances. The first goal took just four minutes as Sophie Bray scored her fourth goal of the tournament. The second goal came near the end of the game, when Bray scored her second.

China, while outplayed for much of the game, had put the Great Britain defence under pressure in the fourth quarter, one attempt in particular drew an excellent stop from Maddie Hinch to deny Wang Mengyu.

After the game Hinch said: “Today was a big game for us with a win or draw keeping us top and giving us a more favourable draw for the big game on Thursday. To put in such a professional, diligent performance was so good to see. It shows what big strides we have made.

“It can be quite hard for a keeper when you are not that busy but I know Danny Kerry would be making sure I stay switched on. I did and was pleased to make a couple of key saves in the final quarter."

Ma Wei of China said: "We are improving with every game, but we have team meetings where we discuss what we need to work on. We must definitely improve our scoring because Great Britain only created a few chances but took them."

In the final match of the pool games, Carlota Petchame scored 27 seconds from time to earn Spain a 2-2 draw against Argentina but, ultimately, the result favoured the South Americans who ended Pool A second with the hosts in third.

Argentina had looked on course to land their third win of the campaign, coming back from a goal down against the tournament hosts. But Spain struck at the death for a healthily received draw. Christina Guinea gave Spain the dream start when she got to a superb cross from Gloria Comerma that was controlled into her path by Berta Bonastre. Argentina rallied but found it difficult to unpick their way through the Spanish defence. Agustina Albertarrio flashed one quick attack just wide of goal before Macarena Rodriguez Perez flipped a bouncing ball into the goal moments before half-time for 1-1.

The South Americans contiuned to press forward in the second half with Albertarrio continually at the heart of their attacks, fizzing a second chance just over the bar. They took the lead seven minutes from the end when Josefina Gomes Fantasia’s low drag-flick evaded the clutches of Maria Ruiz. Spain summoned one last push to bring it back to 2-2. Lola Riera whizzed a ball into the danger area where Begona Garcia nipped around a defender and laid on for Petchame. She smartly pulled the ball away from her marker’s attentions and flicked in.