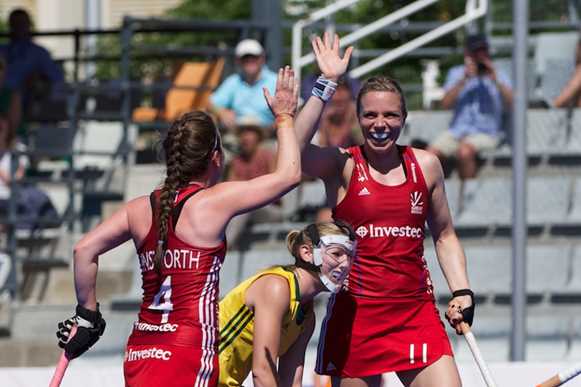 Early goals from Alex Danson and Kate Richardson-Walsh saw Great Britain through to the final four in Valencia, qualifying for the Hockey World League final and moving a considerable step closer to the Olympic Games in the process. By contrast, South Africa will be contesting fifth to eighth place against either Spain or Germany.

"I know we are not there yet, and we still have a job to do, but everything was on this game, we knew we had to win," said Great Britain captain Kate Richardson-Walsh.

Danson spoke of the "professionalism" displayed by Great Britain throughout this competition so far, and she and Hannah MacLeod certainly served notice of GB’s intent in the opening minutes, drawing a fine double-save from Sanani Mangisa.

And Danson was the one to break the deadlock 12 minutes in as she picked up Emily Maguire’s booming pass. The striker had her back to goal but spun out of heavy traffic and slapped in a great goal for 1-0.

A couple of minutes later, Richardson-Walsh’s swept corner shot took a big deflection off Bernadette Coston – running out number one – to spectacularly bounce off the underside of the bar and in to make it 2-0.

South Africa fought back, winning a couple of penalty corners before half-time with Liné Malan going the closest. The second half saw Great Britain under some pressure but they always had a strong buffer in their favour. Susannah Townsend’s shot looped on to the roof of the net while Danson continued to cause problems.

"We came out here for a three week camp before the competition and it was the hardest training I have ever done. I'm not sure at 35, I should be putting myself through that," smiled Richardson-Walsh.

"We also had a lot of work to do psychologically after the disappointment of England's performance at the World Cup, and this was our first big test, and we came through it."

South Africa coach Sheldon Rostron said: "It was always going to be a tough game. We had to put a lot in to get a result out of it and qualify but, at the end of the day, we still have a process to finish as high as possible. We now have to set our sights on the next two games.

“It’s important for us to bounce back and we know what objectives we have to achieve. “The first quarter was the disappointing part. I thought we did really further on in the game. If we had taken more care early in the game, it could have worked out.”