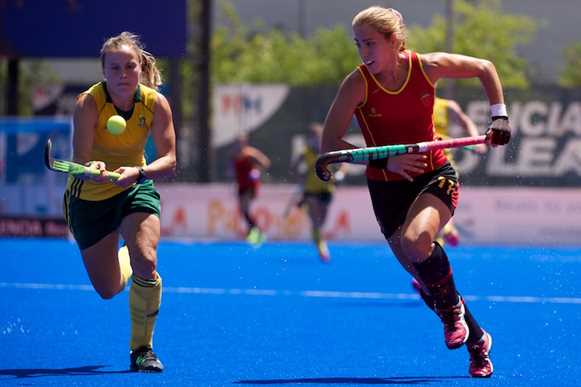 "It is out of our hands now." The disappointment was etched on Shelley Russell's face as Spain put paid to South Africa's hopes of a fifth place finish at the Hockey World League Semi-Finals in Valencia. Russell was referring to South Africa's chances of getting to Rio 2016, their place at the Olympic Games in doubt after they failed to reach the position at this tournament demanded by their sports governing body.

"We just kept making mistakes, poor delivery, missed chances. We created chances in the last quarter, but hey, if we can't put those away…" The result means South Africa will play off against Ireland for 7/8th position – a match Ireland's Shirley McCay will miss through a one match suspension after receiving three yellow cards in the tournament.

Fifth place will be contested by host nation Spain and the USA, offering both sides the slenderest of hopes of Olympic qualification – although nothing will be confirmed until after the culmination of the five continental championships later this summer. Spain's Begona Garcia Grau will miss the game following her one match suspension for receiving two yellow cards for the same offence in the game against South Africa.

In the first game of this penultimate day of action, Lauren Crandall and Katie O’Donnell struck twice as USA found their scoring mojo to beat Ireland 6-1 and keep alive their Olympic hopes as they advance to the 5th/6th place playoff in the Hockey World League Semi-Finals in Valencia.

The Irish had beaten USA 2-0 in the group stages but the world number five side were too strong and were assured and in control for most of the match. In their first meeting, the US let slide eight penalty corners but there was no repeat performance.

Lauren Crandall knocked in two before the ten minute mark, the first after a smart dodge right and her bouncing shot clipped the top of Emma Gray’s pads en route to the goal. The second was far more direct, scooting through Gray’s defences.

Gray subsequently made a trio of great stops in the second quarter but was powerless to stop O’Donnell making it 3-0 in the 35th minute. She turned delightfully in mid-circle to create space and powered home. She added another six minutes later from a corner rebound.

Anna O’Flanagan – with her fourth goal of the tournament – reduced the deficit in similar fashion from Ireland’s second corner. But the US came back strong and were 5-1 up when Paige Selenski picked up the pieces from a scrappy attack that was initially cleared off the Irish line by Shirley McCay but only as far as the striker. She showed little mercy in picking out the top corner.

Jill Witmer then completed the rout two minutes from the end when she finished off a one on one chance in style.

Speaking after the match, Witmer said: "I had a similar one on one situation in our game against Germany and I didn't score. I knew I had to lift the ball and it came off this time.

"We got the momentum early in the game. Cran (Lauren Crandall) got us off to a great start and we played with great energy. After the pool match we felt we were underdogs in this game."

Darren Smith, Ireland's coach, said: “We started poorly and they are a pretty aggressive side. To be successful, we needed to keep it relatively compact. The two-goal lead forced us to step out and play and they unpicked us. They were clinical, took their chances and played at a fierce pace. The damage was done in the first ten minutes and we were stuck behind the eight-ball.”

In the second match, early goals from Alicia Magaz and Lola Riera put Spain on course for a 2-0 win over South Africa, to the delight of the home support.

They maintained that advantage to the end as the African side’s travails in front of goal continued once more. South Africa will play Ireland in the seventh place playoff.

The hosts got off to a dream start when Magaz popped home at the second time of asking in just the fourth minute, popping home from Xantal Gine’s selfless pass when both were in behind the opposition defence.

In the 11th minute, Riera picked out the top corner with a ripper of a drag-flick to double the lead, one which was richly deserved on the balance of play.

South Africa did grow into the tie but Illse Davids could not find a clean connection with the pick of their first half chances and Maria Lopez de Eguilaz was able to clear comfortably. They held sway for much of the second half but were unable to make any inroads into the lead and when Spain cleared a last minute corner, the result was confirmed.

Roccio Ybarra, captain of Spain, said: “We’re happy because of the result but a little bit disappointed with the way we played, especially the second half. “USA is going to be a really good challenge. We both are really fit, in good condition and playing really well so it will be a really good fight for the fifth position.”