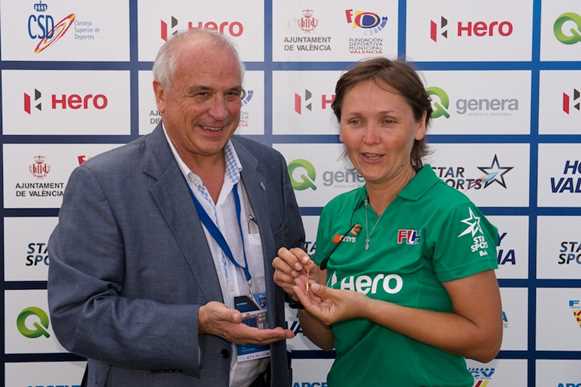 Elena Eskina became the 38th umpire to reach the golden whistle milestone – 100 international games – when she umpired Argentina against China in the semi-final stage of the Hockey World League Semi-Final in Valencia.

Elena and her colleagues celebrated after the match, and the likeable umpire revealed that "besides a deep love for hockey, it is the umpiring team that makes it all worthwhile."

It has not always been easy for Elena to pursue her international umpiring career. She travels to Belarus and Ukraine to umpire internationals, a fair hike from her home country Russia.

Umpire manager Renee Cohen, said: "When Elena first joined the international umpiring circuit, she was very shy. Now she is a tiger on the pitch, she has grown in confidence."

Elena agreed with this assessment. "I started umpiring in 2002, my first match was Germany against Argentina – two giants of the game. I felt so small. I was very uncertain and just felt I didn't know anything."

At 39, Elena has eight more years at the coalface of umpiring. These are eight years she fully intends to see out. "I am always looking to the next game, I might really enjoy a game, but then it is in the past and I am looking to my next game."