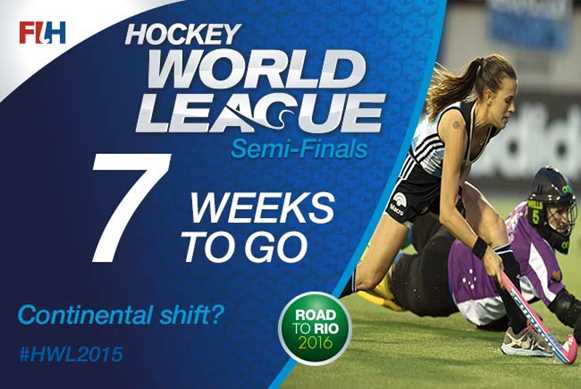 The next few months pits Argentina against Team USA in two Olympic qualifier events. Recent performances by both teams suggest epic encounters ahead.

Carla Rebecchi and Katie O’Donnell are both big players on the international hockey stage. Rebecchi has been a part of Las Leonas senior squad since 2005 and has more than 225 caps for Argentina, while O’Donnel, at 26, is the most decorated athlete in the national hockey squad.

Both players represent where their respective squads are placed currently. Argentina is an established, top-ranking team that is looking a little nervously over its shoulder as the new kids on the block start to challenge the old order. It has been overtaken in the world rankings by a new-look Australian team and, just two ranking places away in fifth place, are the challengers from its own continent – the resurgent USA.

And if Argentina’s coach Santi Capurro and his players need any further evidence that the USA are on their case, then they were given it last weekend at the Hawkes Bay Eight Nations Hockey Tournament in New Zealand, when USA beat Argentina 3-0. Neither team played their best at this tournament – they were playing for the fifth/sixth place – but when it comes to continental bragging rights, this was a seminal moment. And who should score in that match? None other than Katie O’Donnell.

For Carla, and Argentina, the next few months are all about integrating, quickly, the new players who have been called up to replace the retiring old guard, most notably Luciana Aymar. “It's not the same without her, both on the pitch and off the pitch,” says Rebecchi sadly. “She was such a huge part of our team, and she played so many years. It is difficult to play without her.”

Argentina and USA have two chances to qualify for the 2016 Olympic Games, the HWL Semi Finals in Valencia and then the Pan-Am Games in Toronto. On both occasions, they are each other’s biggest threat.

For Katie O’Donnell the next few months offers a chance for her to cement her place as one of the best strikers in the world and to help her team become a genuine Olympic medal prospect.

Speaking after the USA’s trip to New Zealand, O’Donnell explained why she feels the USA is now in a position to challenge any of the top teams in the world, starting with its Pan-Am rivals. “Over the past 10 years, I have seen this team grow so much. We are continuously competing against the top ranked teams in the world, including our Pan American rival, Argentina.  Over the past year we have tied them four times, lost once, and won twice. That record over the past year speaks for itself. We are striving to be number one on the American Continent.”

The USA has two chances to qualify for the 2016 Olympics this year. Firstly at the Hockey World League Semi Finals in Valencia, then at the Pan-Am Games. “I wish I was a fortune teller so I could predict the outcome of these tournaments”, says O’Donnell, “But we are training our tails off so that we can be peaking at our two qualifying tournaments. And I prefer my seat where we have the ability to make our dreams come true.”

So what is it that has made the USA shoot up the world rankings from 11th in June 2014 to its current position of fifth in the world?

“Honestly I attribute all our strengths to a well-rounded group. We have some players who are crazy fast, seriously skilled, great communicators, and also players who can run for days. When you put us together we ultimately bring our personal strength, then feed off our teammates’ strengths. Because we train against each other every single day, you need to give every effort to match your team mates strengths, or you will struggle to succeed in training.”

When it comes to personal strengths, O’Donnell says she has developed tactically and technically in the past two years to the point where she now feels she is a senior player within the squad. “I feel my best strength is my pressing. We are an attacking team and if I can have a little part in helping us get the ball in order to attack I feel I am contributing to this team’s
success.”

Certainly the matches between the two teams in recent months have been a showcase for the values that each team holds dear. Team USA won friends and plaudits for their attacking, innovative play and incredible team spirit at both the Champions Challenge 1 in Glasgow in 2014 and then a few months later at the Hockey World Cup.

Argentina won bronze at that World Cup, beating USA to a medal position. But for the USA, the result signified a huge jump forwards – the team had entered the competition ranked 11th in the world – while Argentina would have liked to have been contesting the gold medal.

Things got better for Argentina as they regained the Champions Trophy in December 2014, and once again the world was treated to a display of attacking wizardry and goal-scoring magic.

As mentioned, both Team USA and Argentina stuttered at the Hawkes Bay tournament. The USA were surprisingly knocked out of contention for a semi-final place by Korea, while Argentina lost to Australia in a close encounter, leaving the two Pan-American teams fighting for fifth place. Rebecchi was sanguine as she explained the loss: “I think it came down to luck, we had plenty of chances, but also our players are learning. As we move forwards, the experienced players in the squad will be very important, but also those players who are more ‘intermediate’, they have to step up and be the base of the team. But the young players, they are the future, we need to build and develop.”

And Rebecchi is fulsome in her praise of her rivals. “I think that USA is a very good team that has improved a lot in the past few years and it's not going to be easy to win, it's always going to be a a very tough game against them.”

With so much at stake, both teams are throwing everything they can at their preparation for the next few months. The teams are in different pools in Valencia, but at some point over the course of the competition the world will discover who holds the upper hand – the new pretenders or the old guard.