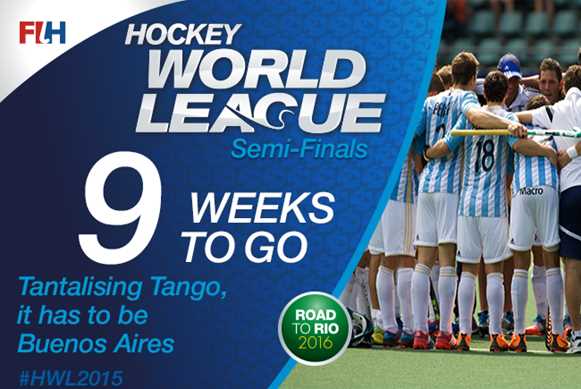 Sizzling steak, tantalising Tango, it has to be Buenos Aires

In the first of our guides to the Hockey World League Semi-Finals host cities, we visit the ‘Good Air’ of Argentina

The second largest city in South America, Buenos Aires is bold, expansive and vibrant. And for the 10 teams competing in the men’s Hockey World League Semi-Finals, it is the backdrop to one of the most important events in this year’s hockey calendar.

Competing in Buenos Aires will be the host nation Argentina (ranked 6), and other top-12 ranked teams Germany (3), the Netherlands (2), New Zealand (7) Korea (8) and Spain (11). These sides, perennial faces at major tournaments, will be joined by lower-ranked nations who have qualified via Hockey World League Round One and Two. These teams include Japan (16), Canada (15), Egypt (20) and the lowest ranked team appearing in Buenos Aires, Austria (22).

So what awaits the teams and spectators when they visit Argentina’s capital city in June? While hockey will be the priority, there is down-time and rest days and Buenos Aires provides plenty of opportunities to experience a new and exciting culture.

Portenos, the city’s residents, boast of their city’s food culture and Argentina’s main culinary delight –delicious beef –is renowned the world over. While you will be able to enjoy food originating from across the continent –Peru, Brazil, Mexico, America –it is the parrillas, or steak joints, that should be your first port of call, serving up a myriad of choices, such as bife de chorizo, vacuo or ono de bife (sirloin, flank and rib eye steak respectively).

Once you have sampled the culinary delights, there are countless other things to do in the city. It is a shopaholic’s dream destination as leather shops, clothing and shoe stores abound. There are upscale boutiques, up and coming designers and artisan craft shops, satisfying every budget and taste. Palermo Viejo is at the heart of the city’s fashion scene, while San Telmo is the place for design and vintage shops.

For culture, the Museo Nacional de Bellas Artes contains some of Argentina’s most important works of art, while the presidential palace Casa Rosada, or Pink House, on the Plaza de Mayo was the setting for Madonna singing “Don’t Cry for Me Argentina”in the film Evita.

No visit to Buenos Aires is complete without the Tango. Argentina’s signature dance seems to pervade the whole city atmosphere once the sun goes down. Whether the notes waft out of the door to a bar or are playing over the radio in an apartment, Buenos Aires is the Tango capital. Locals and tourists alike will gather on the city’s plazas to dance the night away, and if doing a Tango is on your must-do list, then seeing a show or booking a lesson in Buenos Aires is the authentic way to do it.

Hockey players and fans alike who are visiting Argentina for the first time will be bowled over by a country that loves life to the full. Whether it is a tango in the plaza or Los Leones leading their opponents a merry dance on the pitch, Buenos Aires is an exciting destination.