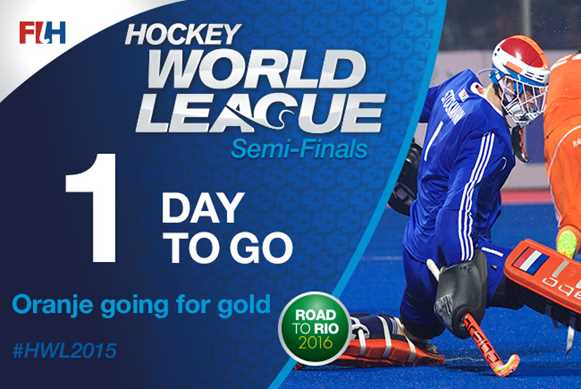 Netherlands men have a title to defend, while the women are seeking to do an impressive treble, but a few teams are standing in the path of the Oranje.

In India, two years ago, the Netherland’s men’s team won the inaugural Hockey World League Final, stampeding to a 7-2 victory over New Zealand. Constantijn Jonker found the net three times, with Billy Bakker scoring twice and Bob de Voogd and Rogier Hofman also scoring. The moment was a sweet one for the men in orange as the trophy cabinet had looked bare of late, certainly by their own high standards.

For the women, winning major trophies has become second nature. Olympic gold in 2012, the successful defence of their 2008 gold medal; and World Cup gold in 2014. Winning a World Hockey League gold medal would be a nice way to start their 2016 Olympic campaign.

Both Jaap Stockmann and Joyce Sombroek have been pivotal in their respective team’s successes. Tellingly, both were voted male and female FIH Goalkeeper of the Year in 2014. They spoke about their hopes for victory in the Hockey World League Semi-Finals, qualification to the World League Final and the 2016 Olympics.

The men will be competing in Buenos Aires, and will be favourites to win by virtue of their number two world work ranking. Among the teams looking to inflict defeat upon the Dutch are Germany and Argentina, with New Zealand hoping to avenge that defeat in India. However, as Jaap points out, any team could upset the form-book, especially when little is known about some of the teams participating. “We have never played against Egypt for instance, so it is difficult to say how they will play. We don't know their qualities, which makes it hard to have expectations. No lower-ranked opposition should be underestimated, since every team can win against anybody. There is a clear development going on and that means lower ranked teams can deliver unexpected results. This is good for international hockey and also for the tournament.”

Jaap spoke about the challenge ahead: “I think we have a chance but it is tough competition. Qualification for the Rio Olympics is at stake which is very important. We see some of the best teams of the world competing and we have to be at our very best to do well at the tournament.”

His counterpart in goal for the women is Joyce Sombroek. She is looking forward to the challenge her team will face in their Semi-Final in Antwerp. “We’re really looking forward to the HWL semi final. It will give us a chance to see where we are at. We’ve trained hard and improved quite a lot of things since the Champions Trophy (Netherlands finished third behind Australia and Argentina).

“Over the last part of the season we have had a busy schedule with our club teams, but for the past few weeks our focus has been entirely on the national team. Our team selection will be announced at the beginning of June and with this squad we will play a few practice games. It’s good to get used to the new rules and game format again, as we don't use them in the Dutch league yet.”

In Antwerp, the Oranje face Azerbaijan first, followed by matches against Korea, Japan and Italy. With respective rankings of 19, 9, 10 and 16, Joyce would be forgiven for a touch of complacency, but this is far from the case. “These are all opponents with different qualities, but I expect all of them to play quite defensively. We have to make sure that we play very dynamically and at a high pace to create opportunities. We want to improve during the tournament and make sure we qualify for both the World League Final and the Olympics in Rio de Janeiro next summer. In the end, I hope to go home with a gold medal, as we always want to win.”