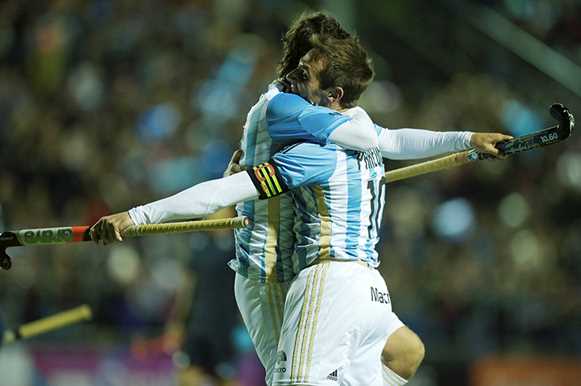 As well as a ticket to the HWL Final, the two victorious nations also confirmed their places at the Rio 2016 Olympic Games in the process.

Goals from Gonzalo Peillat, Juan Gilardi and Ignacio Ortiz helped Argentina to a 3-0 victory over Pan-American rivals Canada in the first semi-final, while a late strike from Oskar Deecke gave Germany a 2-1 semi-final win over European rivals and 2013 Hockey World League champions the Netherlands at the Centro Nacional de Alto Rendimiento Deportivo (CeNARD) in Buenos Aires.

The noisy spectators in the sold-out CeNARD stadium saw a highly intensive match with both teams battling for the victory. Argentina were reduced to nine men after both Manuel Brunet and Facundo Calliano picked up yellow cards in the third and fourth minute of the game. Canada created some promising scoring opportunities during this timeframe but could not get past the outstanding Juan Vivaldi in Los Leones’ goal.

Playing at full strength again, Argentina forced a penalty corner which was fired home by dragflicker Gonzalo Peillat (14’) to give the home team the lead. This was the fifth penalty corner goal for the FIH 2014 Rising Star at this event. Juan Gilardi (23’) doubled the lead through a penalty stroke goal – much to the delight of the home crowd.

The Maple Leafs forced their first penalty corner with 5 minutes remaining in the third quarter. Team-captain Scott Tupper took the shot but Vivaldi saved again. Argentina added another goal through Ignacio Ortiz (42’) when he managed to put the ball through goalie Dave Carter’s legs.

Canada tried hard to get a consolation goal as the minutes ticket away in the last quarter but the Argentine defence stood firm with Vivaldi keeping a clean sheet.

Thoughts on the match

“We wanted to win it because it would have guaranteed the Olympic spot. Unfortunately we were not able to score early in the game, we had some opportunities. It’s tough to play from behind, especially against a team having the home crowd.

“This is amazing. We wanted to win today and to play off in the final tomorrow, so we are really happy. The people come here to support us and so it was nice for them that we scored and won. We are also very happy to be qualified for the World League Final in India because this means we can play the best in the world.”

This match was a close affair with both sides playing fast-paced, high quality hockey.

The Netherlands had the better scoring opportunities in the first two quarters forcing German goalie Nicolas Jacobi to make several saves to keep the score tied at 0-0.

The most promising scoring opportunity for the current Olympic and World Silver medallists arrived in the last minute of the second quarter when Oscar Deecke deflected a shot from Jeroen Hertzberger off the goalline.

The end of the third quarter was highly entertaining, as Jeroen Hertzberger (44’) put the Dutch ahead but Germany struck back one minute later through Florian Fuchs (45’) tipping in a beautiful pass from Martin Häner.

Germany won the first corner of the match with 9 minutes remaining on the clock but Moritz Fürste’s shot was blocked. However, the Germans managed to turn the score around. Oskar Deecke received a good pass from Moritz Fürste and scored from a wide angle sealing the 2-1 victory as well as the two tickets for India and Rio.

Thoughts on the match

“We were by far the better team today. That’s the story of the bad losers, that you try to explain why you lost although you should have won. In the end we had two bad moments in the game and Germany had two good moments in the game, these two collided. They scored two goals and this is their world class. Germany showed today again, that if you give them half a chance they take a whole chance.”

“Of course we are really happy because this has been a tough tournament so far, especially the quarter-final had its ups and downs. We were struggling in the first half but scored two goals in the second half and today we sealed it by taking the step to the Olympics. This is great for our very young team and it is a great success.