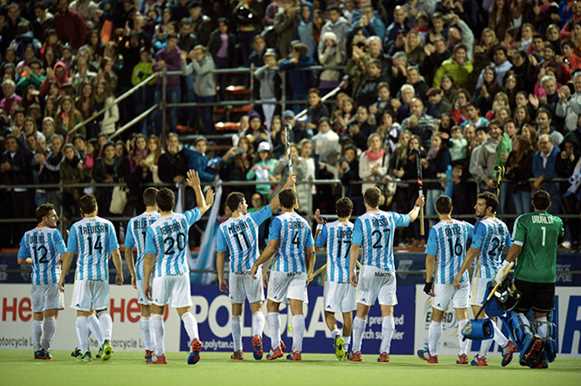 Hockey World League: Buenos Aires is ready for the quarter-finals

The quarter-finals at the Argentina Hockey World League Semi-Final in Buenos Aires are confirmed. Let’s take a closer look at Thursday’s encounters!

QF 2: Germany v Korea (12.30 local time)
Germany finished second in pool B following wins against Spain (4-1), Austria (5-0) and Canada (9-0) and a 4-3 loss against Argentina. Christopher Rühr is top scorer in the squad having scored on four occasions. Germany are the current holders of the Olympic, European and Champions Trophy titles. They are the team having scored the most goals in the pool stage with a total number of 21, followed by Korea with a total of 16. Coach Markus Weise says “We need to do our jobs in defence. If we do this properly, we have very good chances to win.”
Korea finished third in pool A collecting two wins (4-2 v Japan, 7-3 v Egypt), a draw (3-3 v New Zealand) and a loss (6-2 v Netherlands). Korea’s Nam Hyunwoo and Lee Namyong join Rühr on top of the tournament top scorer with four goals each. “This will be a tough match,” says team-captain Lee Seungil. Korea missed out on automatic Olympic qualification at the 2014 Asian Games on home soil in Incheon, where India took home both, the Gold medal and the ticket to Rio, ahead of Silver medallists Pakistan.

QF 1: Netherlands v Spain (15.00 local time)
The Netherlands are still unbeaten after the round-robin phase. They top pool A following wins against Egypt (4-0), Korea (6-2) and Japan (3-1) as well as a 3-3 draw with New Zealand. The team’s top scorer list is led by Billy Bakker, Bob de Voogd and Mink van der Weerden on three goals each. The Dutch scored 14 goals in total in the pool stage but conceded only four. Argentina also conceded just four - the lowest amount among all teams. The Netherlands are the current Olympic and World Cup Silver medallists. Robert van der Horst, the Dutch captain, says “We need to make sure that our defence structure is good for 60 minutes. In the pool stage we had given too many chances away and we also conceded through penalty corner rebounds, so we need to be more sharp on that. We need to put trust in our own game plan and if we do this we are confident to win.”
Spain were unlucky to finish fourth in pool B despite a strong performance against Argentina which they lost 1-0 after the Leones scored with just three minutes left on the clock. The Red Sticks celebrated just one win in the group, beating Austria 4-1. The matches against Germany (4-1) and Canada (3-2) were lost. “Everybody can win a match at this level,” said Spain’s Bosco Perez-Pla. “I know all of the Dutch players because I played in Holland. I think they are the most skilful players in the world. This will be a great game, we need to avoid the Dutch winning penalty corners, so that Mink van der Weerden cannot score.”

QF 3: New Zealand v Canada (17.30 local time)
New Zealand are another team finishing the round-robin without a defeat. The Blacksticks won their pool A matches against Egypt (4-1) and Japan (2-1). The encounters with the Netherlands and Korea finished tied at 1-1 and 3-3 respectively giving New Zealand the second place in the pool. Top scorer in the squad is captain Simon Child who scored three of the 10 goals in the preliminary round. “We need to improve our consistency from period to period. We are a little bit up and down at the moment, so it would be great if we had a consistent performance through all quarters,” says Hugo Inglis who played his 150th cap for the Blacksticks in their match against Korea.
Canada started their Hockey World League Semi Final campaign with a convincing 3-2 win over Spain and a 3-0 victory over Austria before losing 2-1 to Argentina and 9-0 to Germany. Having six points after four matches left the Maple Leafs third in pool B. “We want to win the quarter-final but we need to come out harder than in our match against Germany,” says Brenden Bisset. Top scorer is Devohn Noronha-Teixiera with two goals.

QF 4: Argentina v Japan (20.00 local time)
The last quarter-final sees host nation Argentina taking on Japan. The “Leones” are the only team in this tournament who have finished the pool stage with a perfect record gaining four wins in four matches. The host nation grabbed three points each against Austria (3-0), Canada (2-1), Germany (4-3) and Spain (1-0) to win pool B. “Playing Japan is extremely difficult,” knows Argentine coach Carlos Retegui. “We need to find spaces in their play. I know the stadium will be packed here and the spectators will support us as best as they can.” Top scorer after the pool stage is FIH rising star Gonzalo Peillat who scored from three penalty corners.
Japan finished fourth in pool A. The Samurais defeated Egypt 2-1 but lost the other pool matches to Korea (4-2), New Zealand (2-1) and the Netherlands (3-1). “I'm really looking forward to the quarter-final against the host nation. Especially when the stadium is sold out it will be a tough game, but I want to enjoy this big game as much as I can,“ says Japan’s Ippei Fujimoto. Top scorer in the Samurai squad is Kenji Kitazato with two goals.