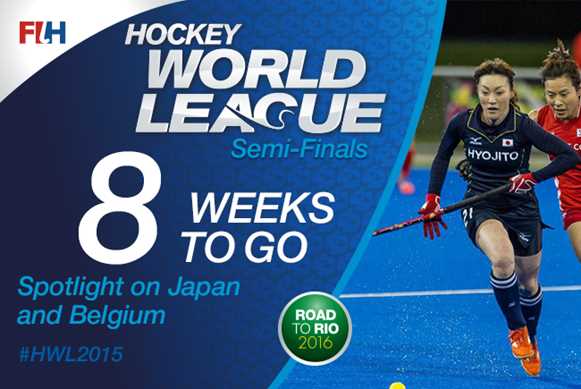 Will Japan blossom or will the Panthers pounce?

Japan and Belgium are two of the women’s teams competing in Antwerp. Both the Cherry Blossoms, as Japan are known, and the Belgium Red Panthers are within touching distance of the ‘big guns’ but have yet to break into the top eight in the world.

The teams play very different styles of hockey: Japan is all about speed, quick counter attacks and stoic defending; Belgium play a game that relies on fast ball pace and maintaining a good structure. But when it comes to determination to improve their world ranking, the teams have an equally fierce desire.

Japan, who are ranked 10th in the world, first appeared on the global hockey stage in the World Cup in 1978. On that occasion the team finished sixth, which has been one of its highest placings in any major tournament. On the continental scene, the Cherry Blossoms are normally battling with China and Korea for the top spot, although in the most recent Hockey Asia Cup and Asian Hockey Champions Trophy – both in 2013 – Japan were victorious. The team was bitterly disappointed to finish fourth at the 2014 Asian Games, behind South Korea, China and India. Both Korea and India will also be in Antwerp.

The 12th-ranked Belgium team are playing catch up with the Belgium men’s team, which has made tremendous strides up the rankings in the past few seasons. Like Japan, the Red Panthers competed in the World Cup in the 1970s, with a fifth place finish in 1974 and a bronze medal in 1978. In the years between 1978 and 2012 however, the nation fell away in terms of hockey performance and it wasn’t until the team appeared at the 2012 Olympics that a new intent became apparent.

Just as Japan has to deal with the close rivalry of China and Korea, so Belgium has suffered from its proximity to the European hockey power houses of Germany and the Netherlands. Belgium’s aim is to be on equal terms with its European rivals. “In terms of being where we want to be, we are about eight years behind the men’s team,” said Pascal Kina, the coach who has been steering his young side over the past few seasons. But the Belgium Hockey Federation is backing its women’s team and the results are beginning to pay off, with Belgium finishing fourth in the EuroHockey Nations Championship in 2013, only missing out on a place in the finals when they were beaten on penalty shoot-out by Germany.

In preparation for the HWL Semi-Finals, Japan has been participating in the Hawkes Bay Eight Nation tournament in New Zealand, where coach Yugi Nagai outlined his plans to turn Japan into a side that plays with more aggression. “We are building muscle and core strength with weight training and hard, physical work,” he said. “I also want a team of players who can make decisions for themselves on the field.”

A key player for Japan will be Yukari Yamamoto, who retired after the London Olympics. The 33-year-old has been coaxed back to help Japan qualify for Rio 2016. “We have come here (to Hawkes Bay) to learn how to be aggressive,” she said.

If Japan are looking to experience, Kina has never been shy of using youth. At the 2014 Hockey World Cup he fielded the youngest player in the competition, Emma Puvrez, who was just 16, while at 19, Aisling D’Hooghe was the youngest goalkeeper.

However, when it comes to the aggression that Yamamoto is hoping her team will bring to Antwerp, there is one Belgium player who epitomises aggressive, attacking hockey and that is the penalty corner specialist and influential defender Stephanie De Groof. During Belgium’s recent six match series against South Africa, it was De Groof who was top scorer, rifling home goals into all areas of the net. And the Belgium fans will be hoping the 23-year-old, who recently celebrated 150 caps for the Red Panthers, is firing on all cylinders as she helps spearheads Belgium’s assault on the HWL Semi-Finals.