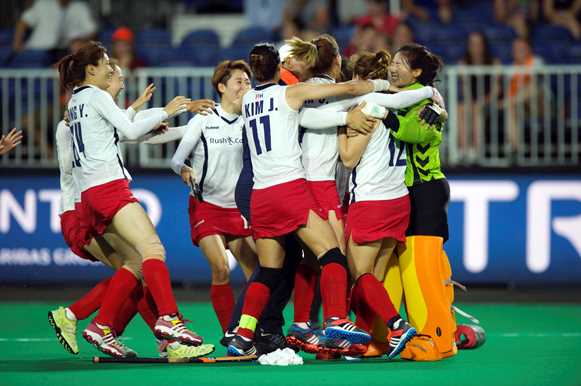 Netherlands women recorded an emphatic victory over Australia, while Korea battled through a gruelling encounter with New Zealand to set the scene for a battle royale in the final of the FINTRO Hockey World League Semi-Final on Saturday.

Today's results mean that the Netherlands join Great Britain, China, Germany and Korea as teams qualified for the Rio 2016 Olympic Games. Australia have also joined the quartet whether they defeat New Zealand or not in the 3-4 play-off.

New Zealand's Black Sticks however must defeat their Oceania rivals to qualify for Rio. This is all down to world ranking. World number three ranked Argentina, who finished fourth in Valencia, will take the next available spot should world no. 4 team New Zealand also finish fourth, but Australia's ranking of second in the world would give the Hockeyroos automatic qualification should they lose to New Zealand.

Tough, resilient and determined to make the most of this opportunity to qualify for both the end of year Hockey World League Final and the Rio 2016 Olympics, both Korea and New Zealand set out their stalls early.

As has been their recent luck though, New Zealand were unable to cope with the demands of a shoot-out situation and saw Korea take the match 4-2 on shoot-out after the game finished 1-1 in regular time.

A typically speedy and skilful run by Anita Punt was the first challenge posed by the Black Sticks to 'keeper Jang Soo Ji, but at the other end, Park Mihyun was creating her own waves among the New Zealand defence.

Park Seunga came close with a reverse stick shot that tested Sally Rutherford's athleticism in the New Zealand goal, and as the half continued, both sides came tantalisingly close to opening the scoring.

The first breakthrough came when New Zealand conceded a penalty stroke following a sharp penalty corner routine. Park Mihyun needed no second invitation to step up and put her side ahead, her powerful and well-placed stroke sending Rutherford the wrong way.

Gemma Flynn showed tenacity and great reactions when she equalised just seconds later. The midfielder picked up the ball and bustled through the defence, before shooting from an unbalanced position. The rebound fell to her and sheer determination saw her flick the ball home.

The second half was a game of cat and mouse, with both teams defending with heart and soul. At times the effort levels were brutal and, while the New Zealand physicality is well-known, they were matched pace for pace and tackle by tackle by their Asian rivals and almost inevitably, the game went to shoot-out.

Recent shoot-out contests have not gone New Zealand's way, and this occasion was no different. Korea scored their first two and this gave them a cushion to secure the win, with Kim Darae scoring the winning goal.

A jubilant head coach, Han Jin Soo praised his team's pace and skill and said that since qualifying for Rio via the Asian Games, his team had grown in confidence. "We have been getting experience through a series of test matches against China and Japan and we also played in the Hawkes Bay tournament in New Zealand. Everything we do, the Hockey World League Final included, is gearing up for Rio."

A masterclass in passing, innovation and sheer delight in performing on the world stage was handed out by the world's number one team to the side seeking, and failing on this occasion, to end Dutch domination of international hockey.

The 5-1 win by the Netherlands over Australia in this FINTRO Hockey World League Semi-Final was hallmark attacking hockey. Perhaps the fifth goal – a Willemijn Bos rocket into the top of the goal from the edge of the circle – best summed up the chutzpah demonstrated by this team.

The result has set up a tantalising clash between Korea and Netherlands, while Australia will face New Zealand in an Oceanic battle royale.

"We are enjoying playing together and we want to express to world how we want to play at this level – with skill, passing and joy," said goalscorer Bos.

"We needed to put our chances away," said a rueful Blyth after the game. "Once the Netherlands got a lead we were in the impossible position of chasing the game."

The deadlock was broken by a goal from Carlien Dirkse van den Heuvel. She got on the end of a shot and deflected it past goalkeeper Rachael Lynch. Maartje Paumen doubled the lead when she scored with a diving deflected shot.

Two penalty corners gave hope of an Australian revival of fortunes but Jodie Kenny's first shot struck a Dutch defender, while her second ferocious shot flew just wide. The Netherlands stepped up through the gears again.

A poacher's goal was snapped up by Ginella Zerbo, as she stepped in front of the Australian defence to deflect the ball high past Rachael Lynch in the Australian goal. The lead was reduced when Kathryn Slattery managed to score an opportunistic goal, flicking it over Joyce Sombroek's head.

The last quarter saw the Dutch shift up yet another gear. Lidewij Welten picked up the ball in the centre of the pitch and ran it into the circle. Her shot left Lynch stranded and the subsequent celebrations demonstrated just how much this Dutch team were enjoying the occasion.

The fifth and final goal was a belter from Bos. She explains it as a 'mistake', saying that the ball was running away from her and she just lunged at it. "It is only my second international goal and I was so happy to score it."

Italian hearts were broken as they lost this match in the cruellest of fashions – sudden death after a neck-and-neck shoot-out contest. The result means India take on Japan for 5/6th place and Italy will face Belgium, who lost to Japan, also after a shoot-out.

It took sudden death to separate Italy and India in the FINTRO Hockey World League Semi-Finals opening match, although it was India who should have won the game in regulation time, according to India Director of High Performance Roel Oltmans.

It was Italy who took the lead through Elisabetta Pacella, after a fantastic ball from Dalia Mirabella found its way past the India defence and left the forward with just the goalkeeper Savita to beat. Rani Rani equalised for India shortly after half-time but a late chance to win the match in regulation time was squandered by Navjot Kaur as she missed a cross that beat the entire Italian defence.

In shoot-out, the scores were at 4-4 after the first round, then India's Savita saved and Rani Rani was able to outwit Chirico to take the India team into a 5/6th encounter with either Japan.

The second match was an evenly-contested affair between two teams that defended strongly but were then unable to turn possession into goal-scoring opportunities.

The first breakthrough came for Japan. Mie Nakashima and Yuri Nagai spearheaded a Japanese counter in the second quarter, their pressure winning the first penalty corner of the game. Shihori Oikawa (18') made the most of the opportunity, sweeping the ball into the Belgium goal.

Stephanie de Groof provided the Red Panther's response on 22 minutes, again a sweep shot from a penalty corner, which flew past Sakiyo Asano into the Japanese goal.

The second half continued in much the same vein, with both teams enjoying periods of pressure but no-one able to make the decisive breakthrough. Post and goalkeeper were called into action as Japan ramped up the pressure in the final quarter, Aisling d'Hooghe was at her athletic best and made vital saves to keep the score at 1-1.

A dramatic shoot-out ensued with Akiko Kato the heroine of the Cherry Blossom team as she scored the decisive goal. Her winning goal followed a disallowed penalty stroke, two referrals and some exciting goal mouth action as both keepers strove to keep their opponent's out.

"You just have to back yourself," she said after the game. "Of course I was nervous but it is something we have practised. It should never have got to that, we created a lot of chances in the game and should have put them away.

The result means that Belgium will play Italy in the 7-8 play-off while Japan take on Asian rivals India to decide who finishes fifth or sixth.