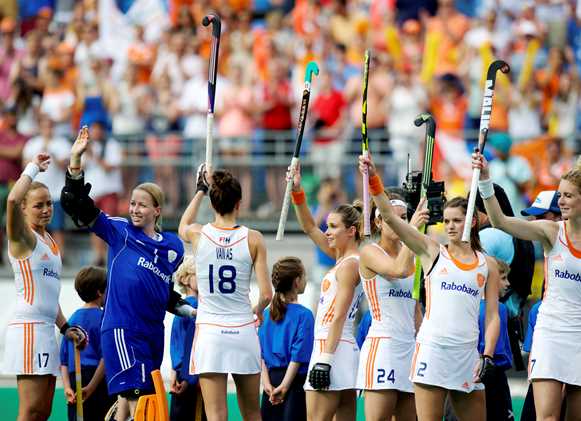 Netherlands, Korea and Australia on the Road to Rio

Netherlands made to battle by Korea's tactical nous

The Netherlands were crowned winners of the FINTRO Hockey World League Semi-Finals as they beat Korea in a tightly contested final that was only decided by a last minute moment of magic from the FINTRO Best Player winner Lidewij Welten.

The Netherlands and Korea played out an intriguing game that was notable for the unrelenting pressure the Netherlands placed on their rivals and the tactical nous of their Asian opponents.

Only a moment of magical trickery in the dying minutes of the game from Player of the Tournament Lidewij Welten separated the two teams. Her mazy dribble into the circle was finished off with a scorcher of a shot from Ellen Hoog.

The match was one of cat and mouse, with the Dutch seemingly finding no way through the impenetrable defence of Korea.

Margot van Geffen worked her magic to create a hole in the wall, but a desperate dive from Carlien van den Heuval saw the Dutch player just failing to connect.

In the second half, the Korea fairytale story looked as if it was getting even better as they scored from a deflected short corner, Park Eunjung (34') proving the hero as she turned Kim Jong's shot into the goal.

The equaliser came from Caia van Maasakker after great build-up play from Welten. Maasakker (44') sent her penalty corner shot flying into the bottom corner of the Korea goal. And so to the final quarter of this intriguing fixture, with the scores poised at 1-1, the teams took to the field for 15 minutes of no-quarter-given action.

First to attack was Netherlands, a powerful run by Welten halted abruptly by Jang Soo Ji. Van As followed up but her shot flew harmlessly over the goal.

The game was decided in the 58th minute when Welten ran at the Korea defence, ghosting past the despairing sticks before slipping to Hoog, whose final shot was emphatic.

Australia claimed third place and an Olympic qualification spot at the expense of Oceania rivals New Zealand. While New Zealand had their moments of pressure, the Hockeyroos set out their stall early and, despite conceding two goals, never looked like losing the match.

Australia took a decisive hold of the game with two goals within two minutes, the first from Emily Smith (3') and the second from Jane Claxton (4').

Rocked by the whirlwind, New Zealand looked at sixes and seven's for much of the first quarter and only a series of saves by Goalkeeper of the Tournament Sally Rutherford, kept the scoreline to a manageable level in that opening period.

Australia's third goal came in the 15th minute. Mariah Williams (15') put the ball away at the second attempt after her first shot rebounded invitingly.

After the break, Stacey Michelesen led the New Zealand revival. The forward weaved through the Australian defence and slotted past Ashlee Wells to reduce the deficit.

It wasn't just at the attacking end that New Zealand began to show their mettle. A combined effort from Brook Neal and Rose Keddell stopped an almost certain fourth goal, Keddell stopping the shot and Neal calmly clearing.

It was Neal who bravely saved from a Hockeyroos penalty corner minutes later, the ball was mis-fired by the usually reliable Jodie Kenny and Neal was alert to the danger posed by the rebound.

However, there was to be no stopping a rampant Australian team and Georgia Nanscawen (45') was on hand to crash home an unstoppable shot from the edge of the circle after Kenny made a beautiful pressure-easing aerial out of defence.

New Zealand came back again through captain Anita Punt (48'). She fired home a drag flick penalty corner into the top corner of the goal. Rutherford kept the Black Sticks in the game with two great saves – one from a penalty corner, the other from open play, while Wells also performed acrobatics to deny a third New Zealand goal.

"We made it really hard on ourselves by conceding two goals so early," said Olivia Merry. "Although we competed well in second part of the game, you can't give Australia a 3-0 lead and hope to chase that down."

"We were so disappointed with our performance against the Netherlands," said Emily Smith. "We wanted to show what we are capable of. We know between now and Rio that we need to find innovative ways to beat the Netherlands and we need to improve our physicality so we stop them getting players behind us."

In a 5/6th place match that was tense and hard-fought, Japan and India played out their own Asian championship in the knowledge that a win would keep Olympic dreams alive.

After 60 minutes of high energy play, it was a single goal by India's Rani Rani that separated the teams.

While Japan had the marginally better structure, it was India who scored the only goal, a delightfully lifted shot from Rani Rani. Just seconds earlier, Japan's defender Nagisa Hayashi had left the field injured, and her stabilising influence was missed for those vital minutes.

Coach Yuji Nagai said that his side just missed too many chances and those mistakes were crucial in a game of this significance. This was particularly true in the final few minutes of the game as the Cherry Blossoms piled on the pressure but just couldn't find that final touch. Savita pulled off a good save from a straight shot and then watched as her team threw themselves in front of everything that Japan threw at them.

"We knew that sixth place was not enough, but fifth means we might still qualify for the Olympics for the first time in our history (India also played in the inaugural women's competition in Moscow 1980)," said a delighted Rani.

Emilie Sinia's 200th cap celebration was made sweeter when her team overcame a spirited Italian attack to secure a 4-2 win and seventh place in the FINTRO Hockey World League Semi-Finals.

"We are disappointed not to have finished higher," said Stephanie de Groof. "Mentally, this win will have done us good, but we must take a stronger mental game to the European Championships. We were 35 seconds from beating Korea and fighting for an Olympic place, that was the disappointment."

The opening goal of the game was scored by Italy's Macarena Ronsissvalli (15') who picked up the slip from Martina Lecchini and placed the ball coolly past Aisling D'Hooghe in the Red Lion's goal. Belgium restored parity through Louise Versavel (19'). She picked up a ball from Aline Fobe and in one sharp move, turned and shot home.

The home team's lead was extended in the 25th minute when Stephanie Vanden Borre slapped the ball past Maria Donati. In the second half, Italy came back strongly and were rewarded with a goal in the 41st minute from captain Chiara Tiddi. The final quarter saw Belgium take the game by the scruff of the neck and put daylight between themselves and their lower ranked rivals. First Versavel doubled her tally and then Vandermeiren made it 4-2.