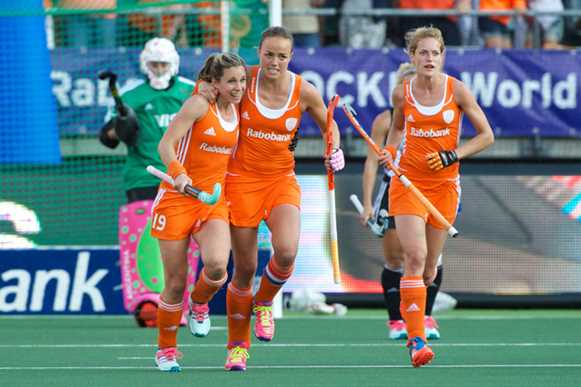 With the start of the eagerly anticipated FINTRO Hockey World League Semi-Finals in Antwerp just days away, we look at the teams that will be competing in these crucial qualification competitions for the HWL Finals and Rio 2016 Olympic Games. Today, turn our gaze to Pool A of the women’s competition, where Netherlands, Korea, Japan, Italy, and Azerbaijan will all be aiming to seal a place in the quarter-finals.

Netherlands - current world ranking: 1
Reigning Hockey World League champions the Netherlands have long been one of the most dominant forces in world hockey, and in recent years have claimed the vast majority of the sport’s biggest prizes. They are the Olympic Gold medallists from both the Beijing 2008 and London 2012 Games, and last year proved themselves as the finest team on the planet by winning the Rabobank Hockey World Cup 2014 in front of their home fans in The Hague. Following the departure of hugely successful Head Coach Max Caldas last summer, who has taken charge of the Dutch men’s national team, the women are now lead by Sjoerd Marijne, an experienced coach who has been involved with various national youth teams in the Netherlands as well as some of the country’s top club teams. Marijne – who will work with the team at least until the end of the 2016 Olympic Games in Rio de Janeiro, Brazil – landed a Bronze medal in his first major assignment thanks to a 3rd place finish at the Argentina Hockey Champions Trophy at the end of last year. The Netherlands team selected for Antwerp includes gifted and experienced attacking players such Naomi van As, Eva de Goede, Lidewij Welten and 2014 FIH Player of the Year Ellen Hoog. Combined with a rock-solid defence marshalled by 2014 FIH Goalkeeper of the Year Joyce Soembroek and the talismanic talents of superstar captain Maartje Paumen, the Netherlands will be, as always, the team to beat.

Korea - current world ranking: 9
Following a difficult 2013 where the side were defeated in the final of the Asia Cup by Japan before recording a dismal 8th place finish at the Argentina Hockey World League Final, Korea started 2014 in disarray but ended the year in high spirits. Their 5th place finish at the Champions Challenge 1 event in Glasgow early in 2014 was a massive low for the proud Korean team, arriving as tournament favourites but failing to secure a place on the podium. However, Korea have always been a talented, industrious team so it was only a matter of time before their fortunes changed. A 7th place finish at the 2014 Rabobank Hockey World Cup proved to be both the turning point and ideal preparation for the 2014 Asian Games on home soil in Incheon. It turned out to be a fantastic tournament for the hosts, defeating China in the competition final to claim a ticket to the Rio 2016 Olympics. Although the race for an Olympic place is not their concern here, the chase for a top three finish to land a berth at the end-of-year Hockey World League Final very much is. With live-wire striker Park Miyun in the team, they are certainly capable of doing it.

Japan - current world ranking: 10
Over the past decade the Japanese women’s team has been making in-roads on the international hockey scene and will be looking to upset the world rankings in Antwerp, something which they have done on numerous occasions in recent years. Their most notable performance of 2013 came when they defeated the higher- ranked Korea in the final of the Asia Cup, a superb result which secured a place at the Rabobank Hockey World Cup for the “Cherry Blossoms”, where they finished in 10th position. Their first foray into the Olympics in 2004 earned them an eighth place finish, and they have qualified for all subsequent Games, a record that they will be hoping to keep in Antwerp. The Japanese team is renowned for being exceptionally quick and masters of counter-attacking hockey, which will be useful assets in their hunt for a top three finish at the Hockey World League Semi-Final.

Italy - current world ranking: 16
A string of outstanding performances at the Hockey World League Round 2 tournament in Montevideo (URU) gave Italy a richly deserved place in the HWL Semi-Final phase. The Europeans bounced back from a surprise shoot-out defeat against lower ranked host nation Uruguay on the opening day to record five victories in succession, brushing aside the challenges from Mexico (5-0), Dominican Republic (5-0), Trinidad & Tobago (3-0), Azerbaijan (4-0) before gaining a measure of revenge over Uruguay with 4-0 triumph in the tournament final. The Italians produced a dominant display against the lower-ranked but hugely talented Uruguayans, with Giuliana Ruggieri, Marcela Casale, Agata Wybieralska and team captain Chiara Tiddi all finding the target in front of packed stadium. Tiddi and Ruggieri are both key players for Italy, being respectively crowned “Best Player” and “Top Scorer” (7 goals) at the tournament in Montevideo. The vast majority of individuals that make up the Italian squad selected for this event are yet to break through the 50 international appearances marker, but that will not stop them from believing that they can upset the odds in Antwerp.

Azerbaijan - current world ranking: 19
Azerbaijan qualified for the Hockey World League Semi-Finals by virtue of being the highest ranked of the 3rd placed finishers from the three Round 2 events, putting them ahead of Chile (3rd in Dublin) and Malaysia (3rd in New Delhi). The Azerbaijanis took the Bronze medal at the HWL R2 tournament in Montevideo, winning their first four matches before falling to a heavy 4-0 semi-final defeat against Italy, a team that they will once again face in Antwerp. The side recovered from that loss to record a comprehensive 5-2 triumph over Mexico, although they were forced to wait until the completion of the Dublin and New Delhi Round 2 tournaments before confirmation came through that they had reached the Semi-Final phase. Key players include team captain Khatira Aliyeva, Lyubov Druzhinina and Farida Mammadova, who scored six goals apiece at the tournament in Montevideo.