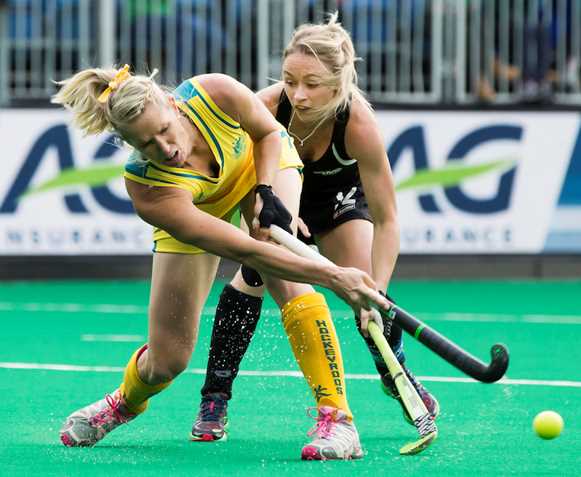 In Pool A, Korea finally kick-started their race to the HWL Finals with their first win of the competition, while Italy continued to enhance their reputation with a hard-earned and extremely valuable draw against Japan thanks to a double strike from Valentina Braconi.

Meanwhile in Pool B, New Zealand’s Black Sticks emerged victorious against Australia’s Hockeyroos in an feisty Oceania derby that witnessed the respective team captains both break records for their country. It was also a good day for Belgium, who thrilled the home fans with another win.

Extended details of the day’s matches can be found below.

Pool A
Korea 11-0 France
Korea’s quest for a ticket to the end of year showpiece Hockey World League Final picked up momentum on Thursday courtesy of a big win over Pool A rivals France.

Kim Jongeun, Park Mihyun, Oh Sunsoon and Han Hye Lyoung all scored doubles, with Cheon Eunbi, Baek Eeseul and Kim Bomi also on target. It was a fourth successive defeat for the brave French girls, who graciously stepped into competition at late notice in place of Azerbaijan but are now certain to feature in the 9-10 Classification match.

Apolline Rogeau, the captain of France, described the competition as a learning experience for her side, believing that the chance to play here will massively benefit them ahead of their upcoming EuroHockey Championship II tournament in Prague, Czech Republic.

“Today we tried got play hard but we were really tired, although we have shown fighting spirit and it has been nice to play in this tournament as it is such a big event.”

The Italians added another point to the four earned from a win against France and draw with Korea and remain unbeaten after three matches, currently sitting second in Pool A with one match remaining. Japan’s Cherry Blossoms lead twice in the match through goals from Akane Shibata and Akiko Kato, but were pegged back on both occasions by goals from Italy’s number 7 Valentina Braconi.

“We are happy with all of the results and we know that the draw today means that we are still capable of fighting for either second or third place in the Pool”, said Italy captain Chiara Tiddi.

Pool B
Poland 0-2 Belgium
Belgium’s Red Panthers claimed their second win of the competition with a 2-0 victory over Pool B opponents Poland, making their place in the cross-over quarter-finals a certainty in the process.

As usual, the fans flocked to Antwerp’s KHC Dragons venue to watch the home team in action, and they were given plenty to cheer about thanks to strikes from Emilie Sinia and Manon Simons.

Speaking about the energy given to her players from the vociferous, passion-fueled crowd, Belgium captain Liselotte van Lindt said: “We are really happy because it was not easy to win this game, and the crowd were amazing. They made a lot of noise and it was really great for us.”

The defeat for Poland means that New Zealand, Australia, Belgium and Poland are all confirmed for the quarter-finals, with the upcoming final round of matches nailing down the positions within the pool.

Australia 0-2 New Zealand
New Zealand’s Black Sticks took the spoils in a classic Oceania derby match, with the world number 4 defeating 2nd ranked Australia in the final match of the day in Antwerp thanks to goals from Anita Punt and Ella Gunson. The result puts New Zealand onto nine points at the top of Pool A, three points clear of their Australian rivals.

Despite defeat, it was also a momentous day for Hockeyroos captain Madonna Blyth, who played her 304th senior international match to surpass the Australian women’s national record of 303 previously held by Nikki Hudson.

“We came out with a pretty clear vision about what we wanted to do today but we didn’t do it very well”, said Madonna Blyth after the match. “Credit to New Zealand though, they played at that pace that we all know they can, and we know we have a lot to improve on heading forward into the ‘quarters’ and our next pool match”.

New Zealand’s new all-time record scorer Anita Punt said: “It was a really tough battle but to come away with the win is awesome with the girls. We just had to keep fighting and it was great to get the two goals.”